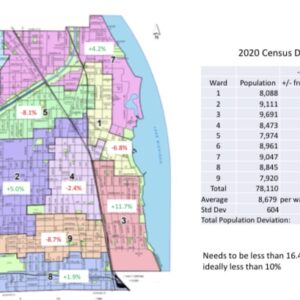 Some residents, left out of the new 5th Ward school lines, wonder about their place in a remapped ward

January 31, 2023 | by Bob | 0
By Bob Seidenberg Some longtime residents living east of Ridge Avenue in Evanston’s Fifth Ward brought concerns about that area’s exclusion from the attendance boundaries of School District 65’s new school into a discussion of new political boundaries for the…

January 23, 2023 | by Bob | 0
By Bob Seidenberg Members of the city’s Redistricting Committee are inching toward mapping the city’s first new political boundaries in 20 years. Committee members have now conducted ward-to-ward analyses in eight of the city’s nine wards, with a meeting on…