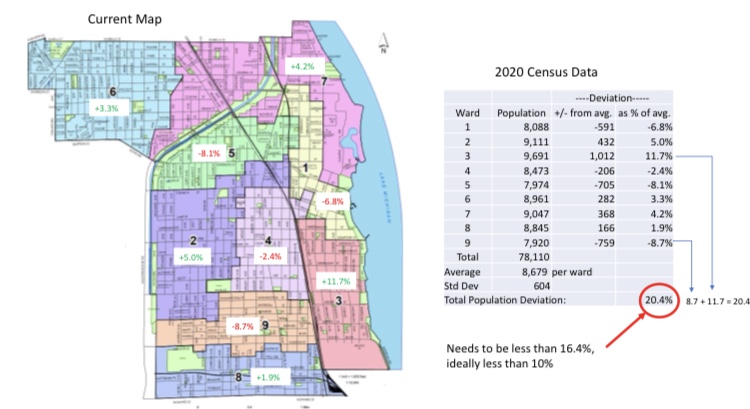 By Bob Seidenberg
Members of the city’s Redistricting Committee are inching toward mapping the city’s first new political boundaries in 20 years.
Committee members have now conducted ward-to-ward analyses in eight of the city’s nine wards, with a meeting on the west side’s Fifth Ward scheduled for Jan. 26.
Fourth Ward City Council member Jonathan Nieuwsma, who seeks as little drama as possible in the city’s ward remapping. Credit: Robert Seidenberg / Evanston RoundTable
“I hope we’re putting people to sleep. Because we don’t want this process to be exciting or dramatic. We want it to be fairly mundane,” quipped Jonathan Nieuwsma, Fourth Ward City Council member and chair of the committee. He predicted, though, some lively discussions once the maps are released.

Unlike in 2003, when Council members ended up with 15 different maps submitted by various groups, Nieuwsma said the committee deliberately chose an incremental approach “which means rather than just throwing out the [existing] map and starting over, we’re just going to try to get to where we need to go,” proceeding “as simple as possible, tweaking some borders here and there, and, for the most part, leaving as much as we can voters in wards where they currently live.”
Evanston’s population increased by 3,624 residents between 2010 and 2020, according to 2020 Census results, to 78,110.
The average ward size is 8,679, according to the 2020 Census, but the largest ward, the Third, has 9,691 residents, and the smallest, the Ninth, has 7,920. Ideally, the ward sizes should be within 10% of each other.

At their Jan. 10 session, redistricting committee members focused on the First and Third wards.
The First Ward, with 8,088 people is undersized by 591 people from the citywide ward average of 8,679. Sitting just to the south and also occupying a portion of the lakefront, the Third Ward population is 1,012 above the ward average.

Leading off the discussion, Nieuwsma said the most obvious candidate for change is a set of blocks located on the border of the First and Third Wards, east of the tracks between Lake Street and Dempster Avenue.
With the First Ward underpopulated, it probably makes sense to move the section out of the overpopulated Third Ward, he said.
Clare Kelly, who represents the First Ward, said she did not think that was direction to go. She noted the First Ward is “very long,” stretching north south from Lincoln to Davis Street. She suggested looking more to the Seventh Ward (368 people more than the average ward population) and adjusting borders there – a move that would bring some student residences students in the First Ward.
That would address concerns voiced in the past about Northwestern University students being split between the two wards, diluting their political voice.

Third Ward Council member Melissa Wynne, meanwhile, pointed out that a number of the blocks in the area highlighted by Nieuwsma were formerly in the Fourth Ward and had been shifted over to the Third Ward in the 2003 redistricting.
She said those six blocks are fairly compact and include residential buildings, some multi-family residences. An obvious way to go, she said, would be to move some of the blocks into the Fourth Ward and some  into the First.
Committee members made no decisions, reserving the meeting for discussion only.
Within the next month, though, Nieuwsma said, a tentative plan is for committee members to start working with software, drawing up provisional maps, and then “see where we’re at.”
Ultimately, he said, “We want to keep it simple and propose two or three maps that get us to where we need to go, submit those to the public for additional comment.”

Then, if that phase is successful, the group would settle on one map, recommending their choice to the City Council’s Rules Committee.
The new map will then go to the full City Council, sometime after the special April election to fill two vacated Council seats.