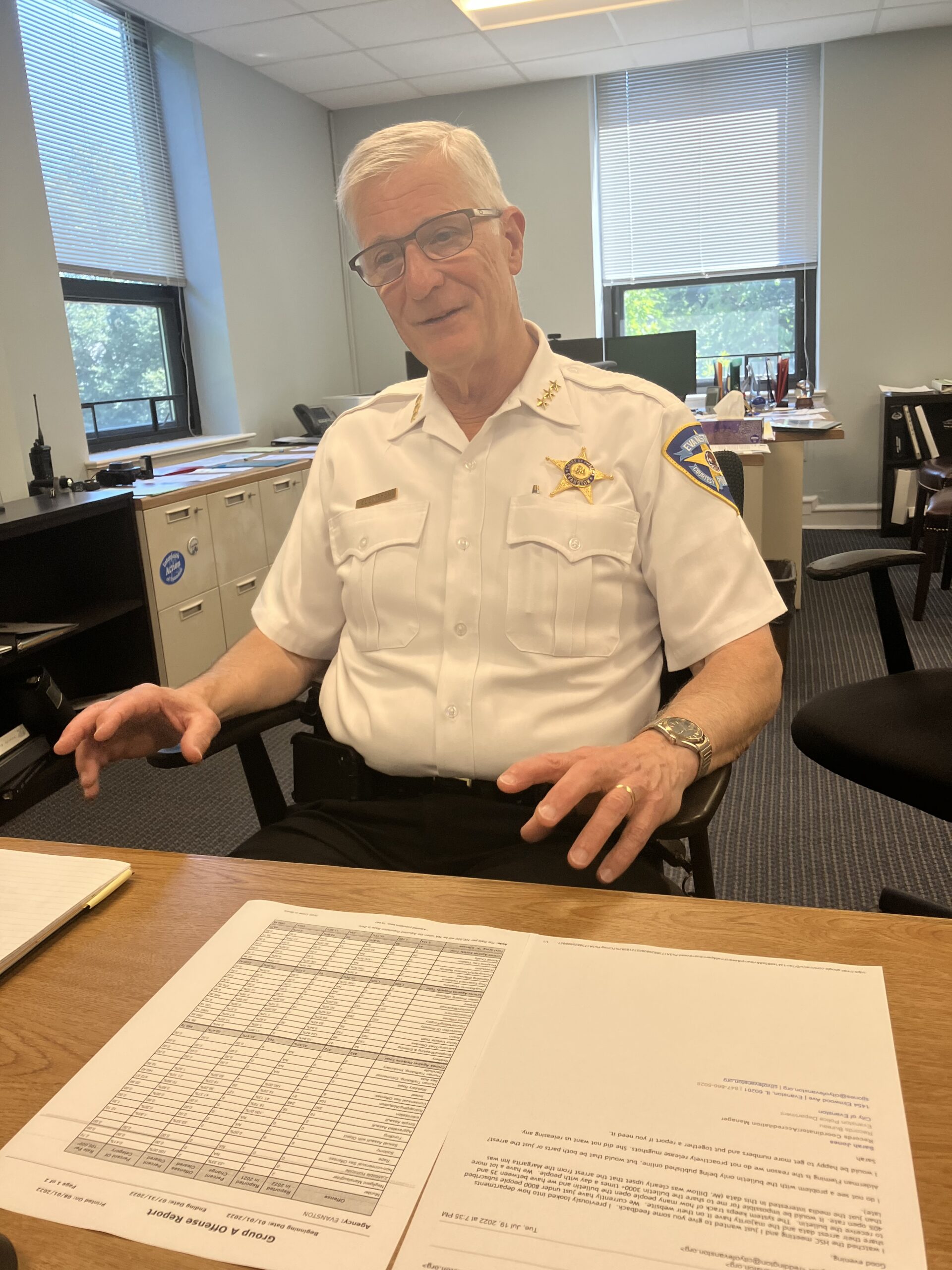 Evanston police scrambled to fill 12-hour shifts, making 47 hire backs of officers last month, leading up to an Aug. 4 announcement that the Department’s Community Policing Unit (CPU) would be shifted to patrol in order to address a severe staff shortage.

The Department announced in the release that five members, four officers and a sergeant, of the unit were being shifted to patrol for what is anticipated to be a minimum 60 day temporary duty assignment.

“This drastic step is necessary due to the continued staffing shortages faced by the Department,” police said.

The reassigned officers in the unit are among the city’s most visible. In many respects, they serve as the Department’s face to the public. At ward meetings, Council members often turn to the officers present to provide insight about recent crime trends, and the officers provide thoughtful analyses and suggest steps community members might take to better protect themselves.

“It’s a group of people that are hard-working and have done what the Department has asked,” said Eddington, during an interview in his office on the second floor of the police station, 1454 Elmwood Ave., on Aug. 5. “And this is a significant ask for a temporary period of time, and I realized (with the announcement)  there’s consternation in the community.”

“But at the end of the day, to police a city of 75,000 people you need police officers,” he said. “Then you need police officers in the patrol division. I’m hopeful that as we get people to complete their field training program that we can begin to replace the people in the CPU. But that’s dependent upon a whole lot of factors.”

One of the factors is reaching some level of assurance there are enough officers to fill a 12-hour shift, he indicated.

In the month of July alone, the Department had 47 hire backs – officers who were called back to work or were held over to work an additional six hours so police could have ten people on the shift.

The Department might make 10 hire-backs if staffing was closer to adequate, Eddington estimated.

Police refer to a “relief factor” in filling shifts, having enough officers available to work so they do not run into a shortage, Eddington said.

One immediate consideration, “is there’s no extra training [authorized]. It would be rare,” Eddington said in the interview. “If somebody gets extra training right now, it would cause a hire-back, which further exacerbates  the staffing situation, so we’re looking to avoid that  as much as possible.“

”The other issue [to fielding a shift right now] is that nobody else gets hurt,” he said. “Nobody else accepts another job. And so we’re walking this high wire act of staffing. And it is, in my opinion, up to the Chief of Police to make the decisions on how best to use these resources that’s most effective for the community and delivery of service.”

Eddington, chief of the Department from 2007 to 2018, has been bringing attention to the staff shortage since the city called him back to lead the Department in an interim role status at the beginning of the year.

As of October 27, 2021, there were 135 sworn and 43 civilian employees in the Department, for a headcount of 178, resulting in 19 sworn and 10 civilian vacancies, police said in a March report to the Council’s Human Services Committee.

In their release, police reported the staffing shortage presently stands at 26 sworn vacancies and six civilian vacancies. In addition to these vacancies, there are presently seven sworn members and two civilian members who are not available for full-duty assignments.

In his office, Eddington ticked off more detail.

“Everything from hip and knee replacement to unrelated surgeries. But when you have an organization of the size [of Evanston’s], people get sick; people are unavailable to go full steam.”

He quoted a line from the 2012 movie “Argo” when pressed for the rationale around the reassignment decision.

“‘This is the best bad idea we have, sir,’” one of the actors tells the CIA director in the 2011 film, trying to get hostages out of Iran.

“There was nowhere else to go with my concern about tired officers driving squad cars,” Eddington explained, “working for 16 hours, then getting six hours off and being ordered back to work another 12 hours.“We can’t hold people over for an entire double shift 24 hours – that’s not feasible,” he said.

“Also [in] trying to fill in half shifts, there [are] other complications that have to do with  fatigue that I have to be aware of – in the context of not only “Is this the way I should treat employees?’ but also with an eye on the village coffers,” he said. “If I’m chief,  allowing decisions that cause fatigued officers to be out there, and something goes wrong, the city’s going to pay. And so I’m looking to avoid those situations. And part of that deals with bringing CPU back to patrol for approximately 60 days. So we can hopefully stabilize the manpower, get enough people out a field training program to begin to reassign those people back to the CPU.”

Staffing is a nationwide issue for law enforcement everywhere, but Evanston is particularly affected, Eddington said in the interview.

“Unfortunately in the Evanston area, we’re in a very competitive environment for police services; and there are a substantial number of suburbs that are willing to pay substantial dollars to pirate our trained personnel,” Eddington said.

“When you have that, literally [the] backbone of the Police Department leave with five to 11 years of experience, that’s extremely difficult to replace,” he said, “because they’re not only walking out the door with their basic training, but the substantial investment that the Department has put into them in those intervening years.”

“At least five of the officers who went through the training are among those who left the Department,” he said. “So not only do we have to replace those people over the course of time, but we’re going to have to replace that sophisticated technical training.”

As for some of the factors at play in the officer exodus, he named the state’s two-tier pension system. A vast number of the Department’s core personnel are two-tier pensioners, he said, which essentially means their pensions are portable to any other Illinois municipality.

City chaos can be a factor too

The state’s adoption of the system in 2011, “looks good on paper, but then reality hits, and we have created a system where every day is a free-agent market,” Eddington said during the interview. “I mean, baseball was at least smart enough to restrict this to part of the season. Clearly, the politicians in Springfield weren’t, and so we’re dealing with, on any given day, one of the excellent police officers that work for the city of Evanston walking in my office [and saying], ‘Hey, Boss, I’ve got an offer from Arlington Heights, Palatine, Geneva, St. Charles, Barrington Hills …. I’m going to top out at 12 grand more, and, you know, everybody likes the police out there. So I’m sorry. I’ll see you later.”

He says he believes the turbulence on display in the city, such as in the city manager search, can have an effect on officers’ decisions as well.

“First of all, the city has come through an excruciatingly horrific, chaotic period,” he said. “And when there’s chaos at the top, it’s like a virus that goes through the entire organization. And I think that we continue to be impacted by that.

“One of the things that I don’t think everyone has wrapped their arms around,” he said. “is [that] when we display our toxic environment, it is a disservice to recruiting, from the top to the bottom – whether you’re a person who’s talented enough to be a city manager or some kid just out of the armed services or college who wants to be  a police [officer].

“People are astute enough to protect their self-interest and say, ‘Do I want to jump into the sandstorm?’ or, ‘What other options do I have?”

There’s another, perhaps more basic, factor – the money a jurisdiction is willing to pay.

Earlier this year, officials, including Eddington, negotiated an agreement with the Fraternal Order of Police, the union which represents police officers, on retention and lateral-referral bonuses.

In the release announcing the reassignment, the Department said the move is to be for a minimum of 60 days. Eddington said the Department anticipates getting several people out of the Field Training Officer program late this month or early next month, and that there are a couple of other possible additions, all toward restoring the unit.

For now, though, “It’s a tough decision,” he said. “We’re trying to mitigate it in several ways. We’re going to make sure that the officers who have been reassigned give their schedules to the elected official [they normally work with]. So, if you really want to see this officer, here’s his or her day-off pattern.”

Also, “They’re going to be out in the community, doing the things that got them in to that unit – that contact with the public, that ability to interact with people. So it’s not like I’ve said, ‘Go drive around and write speeding tickets. No, they’re going to be out there doing what they did before, on a different schedule. And, yes, they’re going to have a call-load that they didn’t have before. But in this particular situation, we’ve come to a point staffing-wise where the Department can’t manage the sick call-ins and other events without utilizing this manpower on a temporary basis.”