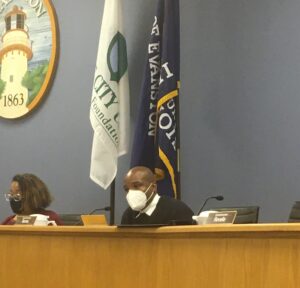 With the Illinois moratorium on evictions ended on Oct. 3, an Evanston Council Member is calling the City to receive early notice of potential evictions of Evanston residents and pass that information along to renters that they might have to vacate their buildings.
Fifth Ward Council Member Bobby Burns’s comments came during a discussion about gentrification and displacement. He and Mayor Daniel Biss had referred to the City Council’s Human Services Committee a proposal to create a subcommittee to address those larger issues.
At the Oct. 4 Human Services Committee meeting, Burns said he could see Human Services Committee members working with the yet-to-be-formed subcommittee “to determine how we can prepare for the amount of evictions I think we may be looking at in the next few weeks.”
He suggested those steps might include requiring landlords provide the City with notice that they were preparing to take eviction action, so timing would be a part of the discussion. Throughout Cook County, the Sheriff’s Department serves eviction notices to tenants.
“Do we want [the notice] when the eviction is filed? Do we want it 30 days prior to the eviction? Do we want it after the court decides [but] before the day the eviction happens?” Burns asked.
He told Committee members, “My concern is that I’ve had a few cases in the ward where I get a call the same day that someone is being evicted – right now, at that very moment – and they’re looking for me to respond and help.”
With so little notice, he said, “There’s not much that I can do, that the Health Department can do, and that our partners organizations like Connections [Connections for the Homeless] and others can do.”
Responding, Ninth Ward Council Member Cicely Fleming suggested the City might want to examine the landlord’s responsibility in such situations, too.
“Landlords are supposed to register their rental units [with the City], and they don’t all do it,” she noted.
“If a tenant is being evicted and they also are living in a not-habitable place, we want to make sure the landlord has responsibility there,” she said.
She suggested that, with eviction notices going out, City officials could determine a plan for addressing the issue, including the staffing needed, and then reporting their recommendations to the full Council rather than bringing it back to the Human Services Committee.
Emergency housing an expensive solution
The City can do that, responded Ike Ogbo, the City’s Health and Human Services Director.
However, he said, if the City were to provide alternative housing to address such situations, “we definitely need a specific or identified funding source to housing individuals.
The City has been housing a number of evicted people in hotels, Ogbo said, “and that can get expensive, especially in situations where relocation is not achieved or not foreseeable. So these are things that we will have to consider.
“And not only that,” Ogbo added, “I want us to be sensitive to peoples’ rights, but we also do not want individuals who want to take advantage of the policy.”
Burns said another piece of his proposal is that the City furnish the landlord with information about the different homelessness-prevention programs available. The landlord would then be required to give that information to the tenant.
Further, Burns noted that he had made another referral that called for the City to look at creating a Victim Services Fund, to pay not just emergency-hotel and related expenses but other expenses that come up in emergencies.
Fleming pointed out, though, that Burns’s second referral dealt with such