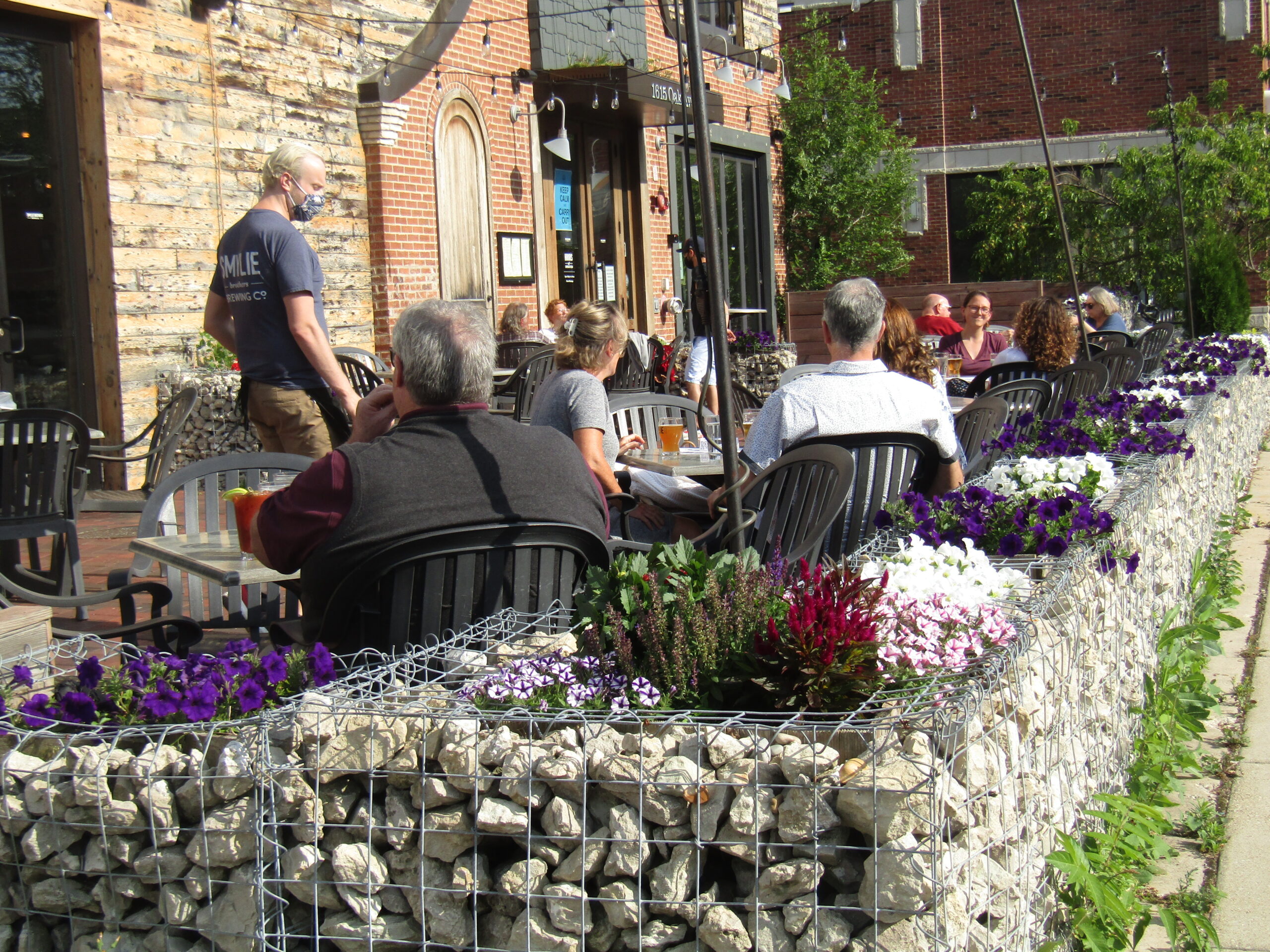 Gina Speckman, executive director of the Chicago North Shore Convention & Visitors Bureau, had led off with a fact-filled presentation at the city’s Economic Development Committee meeting June 23  on why the city should support her group, which works to attract visitors to Evanston.

Dan Kelch, local restauranteur and member of the CNSCVB, was scheduled in to speak next at the meeting, which was being held virtual.

When he didn’t come on the line immediately, Ms. Speckman had a pretty good idea where he was.

“Dan is now cooking,” she told Committee members. “If he’s not here that means he’s on a hot grill.”

Indeed, Mr. Kelch, who came on in a short bit and offered o  a strong endorsement of CNSCVB, was occupied at the moment, he confirmed later.

“I’ve been doing a little bit of everything, right?” he said. “Helping dishwashers, helping cooks helping bartenders. Wherever there’s a pressure point, what I’ve been doing is I run there and give them a hand — get them out of the weeds (as) we call it in the industry, and then move on.”

The order in effect lifted capacity limits. But for many local restaurants, Mr. Kelch’s included, getting up to full speed has been difficult because of extreme staff shortages.

“It’s a big issue,” said Annie Coakley, the executive director of downtownevanston.org., which

provides marketing and management services to downtown Evanston. “These restaurant guys — who have been doing this for a very long time — say they never have seen anything like this.”

The shortage of help “runs the gamut,” she said, and includes cooks, dishwashers wait staff.

Extended unemployment insurance  is keeping some employees on the sideline but is not the only reason, Ms. Coakley and some restaurant owners said.

Some employees still have health concerns about returning to work. Some have gone back to school or left work to pursue other careers.

The lack of employees has hit restaurants big and small.

At Smylie Brothers Brewing, 1615 Oak Ave., and definitely in the “big” category, “you know we’ve got 290 seats in our restaurant,” said Michael Smylie, the owner. “We’re probably only seating about 60 right now because we don’t have enough cooks to produce the amount of food in order to serve all those tables at once.”

“We’re also not able to host any private events, which is, you know really a big revenue generator for our business. And we can’t really go back to normal until this labor issue is resolved.”

Before Covid, the restaurant employed about 60 part time and full time employees. “Now we have around  35,” said Mr. Smylie.

“So… we can’t operate at full capacity,” he explained. “But our overhead is still the same. Property taxes aren’t going down, especially in Evanston. You’ve got property taxes, you’ve got utilities, you’ve got all these things that don’t really change, and then you have an inability to create revenue based on lack of a labor force.”

“We started trying to hire in April and we still have only hired maybe one person in that amount of time,” he said June 23.

“We routinely get people that set up an interview,”

he said. “And then we’re there waiting and they don’t show up. And that’s mainly to require the unemployment office request to provide proof that you’re looking for a job. So we’re getting ghosted left and right.”

In summer, the total number of employees serving the three restaurants ramps up to about 120 employees, he said. In the non-summer months, the total is somewhere in the seventies, he said,

He said there are some signs, though, that the situation may be loosening up.

“For a while there we would put ads out —I had ads running all the way up to Milwaukee and out to Rockford, and all the way down to, you know some of the southern suburbs, looking for help; and we we put out online ads and got like zero response.”

Recently, he sent out a new round of ads “and at least I’m getting phone calls and people coming in so it’s beginning to loosen up a little bit,” he said. “But it’s been, it’s been a very highly unusual situation.”

That doesn’t mean he can stop pitching in with the cooking and other duties.

“We  have three kitchens here — really four in a sense.,” he said. “We have a prep kitchen where desserts come out of, we have what’s called a fire line, which is the hotline downstairs that feeds the food for Taco Diablo and would feed the food for what would be the Blue Horse menu.

Upstairs includes an outdoor station where the grills are, as well as an indoor kitchen.

“So I could be anywhere,” said Mr. Kelch. “I just kind of watch and see. You know when the tickets (with orders) start coming in — this guy suddenly has 14 dishes, and that guy over there needs a hand. So I’m going to move over there and help that guy for a little bit and then step out and see where the next issue is, where I’ve got to go.”

It’s not foolproof, he acknowledged. The restaurants also do a lot of carry out and delivery, so you know that’s another aspect of our business.”

“ Sometimes we just can’t get the food out quick enough and it’s gotten to the point sometimes where we have to just stop taking those orders, because we’ll just get so overwhelmed with regular business and carry out delivery of business that the kitchen is just, they’re buried.

“ So because of the shortage of hands we just can’t keep up,” he said. “We have to turn off our website ordering platform when people call us. We’ll  have to tell them we’re not taking carry out orders for another hour, an hour and a half, something like that.

“In a way I guess that’s a nice problem to have, that kind of demand,” he said. “But you know  you work hard to capture your clientele, and work hard to give them a product and get their loyalty and then when you have to be in this position, to turn the business away or to disappoint people or be late on your delivery or be late on your carry out or whatever.”

“It is what is,” he concluded.