By Bob Seidenberg
With a population deviation of more than 20% between some wards,  members of  a city Redistricting Committee recommended May 10 the City move forward on remapping effort to create greater balance.
At the same time, officials vowed to keep the process as simple and straightforward as possible.
Fourth Ward Council member Jonathan Nieuwsma is chairing the Committee, which includes fellow Council members Melissa Wynne, 3rd Ward; Bobby Burns, 5th Ward; and Devon Reid, 8th Ward – in the first real remapping of Evanston’s nine ward boundaries since 2003. Reid participated remotely in the May 10 meeting. 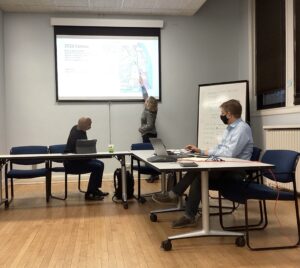 Under a strict reading of State law, Council members would not be required to redistrict unless the city’s population (78,110 according to the 2020 Census) were to fall below 70,000 or rise above 90,000, officials said at the meeting.
However, State law does allow the city to redistrict “for any other reason,” pointed out Nieuwsma.
Big differences among some wards fueled the need
With a population difference of 20.4% between some wards, officials opted to move ahead, following state statute that advises that if undertaking the process, “wards shall be as nearly equal in population, and the wards shall be as compact and contiguous in territory, as practicable.”
Evanston’s population increased by just under 5% percent between 2010 and 2020, gaining 3,624 residents, according to 2020 Census results.
The population of the city’s nine wards ranged from 7,920 in the Ninth Ward in south central and west Evanston, to 9,691 in the Third Ward in central and south Evanston (see accompanying ward map.) 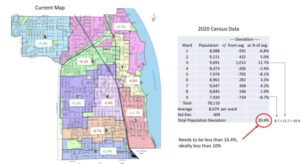 The average ward size is 8,679 persons, according to the 2020 Census figures. The deviation from the average run as high as 20.4%.
Nieuwsma noted that State law indicates that a 10% to 16.4% deviation can be acceptable if justified by legitimate considerations.
Ideally, a less-than-10% deviation is regarded as compliant with the “One person, one vote,” standard.
“I’ll go as far as to say as close to zero as you can get, if you’re really going for ‘One person, one vote,’” he said.
Committee members voted unanimously to move forward on the remapping effort.
Simple and straightforward
To Nieuwsma’s query about what approach they should take, Committee members backed one that would be as simple and straightforward as possible.
The changes could be as subtle as the block level. For instance, Burns, a first time Council member, pointed to a shift between the Second Ward and the farther north Fifth Ward,  involving “neighbors that know one another, that are already working together anyway.”
Nieuwsma prepared for the meeting by reading past press news stories of city redistricting efforts, including some from 2003.
That year, officials ended up considering 15 different maps, balancing questions of minority representation and concerns that Northwestern University students were being split up.
Even so, he said, “I went into this process thinking that it can’t be that difficult,” he said. “We’ve just got to balance the numbers. We should be able to get through this relatively painlessly without too much angst, and I hope that will be the case in 2022 too.”
Should other wards have share of the lakefront?
Those sentiments, however, were tested barely a half hour into the meeting, with Council member Reid suggesting officials consider mapping changes that would give other wards “a portion of the lakefront, spreading out representation” from the Seventh, First and Third Wards, whose boundaries run along the lake. He said such a move would add “more ethnic diversity,” and also give other communities a feeling of ownership of the area.
Wynne, whose Third Ward does include a portion of the lakefront, observed that to achieve that goal the city would be violating criteria established for the remapping process.
“You’re going to slice through neighborhoods of contiguity, of natural boundaries, of man-made boundaries,” she told Reid.
“You’re looking at two train lines, Chicago Avenue, which carries over 20,000 cars a day,” she said of the area’s individuality.
Such a change would break up neighborhoods, she argued. “The blocks of Forest and Michigan are double blocks down there. The 600 and 700 hundred blocks are all neighborhoods where kids play back and forth. Neighbors know each other, blocks have block parties together. The community around Baker Park extends in a radius around it.”
Deciding “we’re not going to answer that question definitely,” Nieuwsma asked committee members to move forward on a hearing process on the remapping changes.
The group hopes to kick off the process with two separate town hall meetings to be conducted virtually, in July, one to be presented in Spanish.
The committee also plans to meet regularly at the start of the process, with another session planned forTuesday, June 28, to be carried over Zoom.