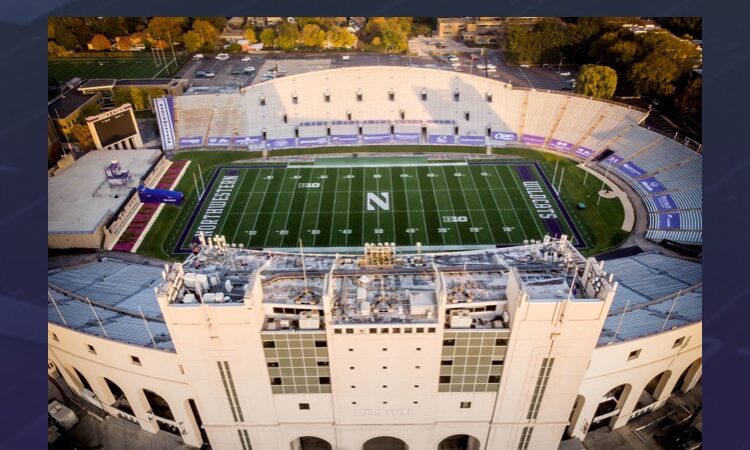 Residents living around Northwestern University’s Ryan Field now have a team in place to share their questions and concerns with university officials as the school moves forward on its multiyear project to rebuild the stadium.

Evanston City Council member Eleanor Revelle, in whose Seventh Ward the stadium is located, announced at the start of her March 23 ward meeting the names of residents – one from Wilmette, the others from Evanston – who will serve on the team.

The residents represent neighborhoods on different sides of the stadium at 1501 Central St.

Neighborhood participation is a key element in the project.

Unlike stadiums in other Big 10 towns, Ryan Field is surrounded by five residential neighborhoods, longtime resident Mary Rosinski pointed out Dec. 16 at the initial meeting on the project.

Along with the neighborhood representatives, Revelle said, a working group of residents has been established to meet with university officials.

The working group has met three times now, she said. “First, we heard about what the deficiencies were, from Northwestern’s perspective, in terms of what they wish would be better in the new stadium – what is the big wish list to give to the eventual architects for the design of the new project,” she said.

“And then the neighbors on the committee [working group] have put together lists, in consultation with their neighbors, about issues they wish to see addressed in the new stadium.
And we talked quite a bit about how we’re going to communicate with you all,” she said to residents, who participated virtually in the ward meeting through Zoom.

One key method of communication between neighbors and the university is a web page the school has established dedicated to the project, said Dave Davis, Northwestern’s Executive Director of Neighborhood and Community Relations, who was at the meeting.
He said the hope is that the web page “will help our neighbors to better voice and share their concerns and their ideas and their thoughts with the university.”

He added that the university from the outset of the project received a number of requests and “asks” from residents – about 50 in all. He said they fell into about five categories: light, noise, pollution, game day operations, and the special use and design of the stadium.

Davis said the hope is to work with the neighborhood representatives on prioritizing the various issues. The plan, he said, is to then take those ideas to project leaders to be considered as part of the design process.
We want to make sure that we incorporate your requests into the overall list of high-priority items,” he told neighbors at the meeting, “so we need to get this information as soon as possible.” Officials also provided residents a link to sign up.

Last year, the university announced plans for a rebuild of the stadium, constructed in 1926 and originally known as Dyche Stadium.

The project was set in motion in September 2021, when university alums Patrick and Shirley W. Ryan committed $480 million, the largest philanthropic gift in Northwestern history, to accelerate breakthroughs in biomedical, economic and business research, and begin the process to rethink and rebuild Ryan Field.

The stadium has been well maintained for its age; however, it does not meet American Disabilities Act standards nor Northwestern’s “commitment to universal design,” officials said on their website at the time.

“It also is lacking in fan amenities, operational provisions and many other features common in large spectator venues today. The new Ryan Field will be one of the most accessible stadiums in college athletics and provide a first-class experience for students, alumni, fans and the greater community,” officials said.
At the March 23 meeting, Bonnie Humphrey, Northwestern’s Director of Design & Facilities Management, said the university is in negotiations to select an architect and hopes to wrap up that process before the end of the month.

After that, she said, “We’ll jump right into some of the pre-design tasks the architect needs to do as far as starting the conceptual design, so we’re kind of anxious to do that once an agreement [with an architect] is in place.”

One of the participants at the meeting asked Northwestern officials whether the project is viewed as a rebuild or remodeling of the existing structure – or a combination of the two.

“And what is the footprint?” he asked. “It appears that if you’re doing soil-testing out in the east parking lot; you’re looking to expand the footprint on that,” he said.

Some preparatory work has begun

Humphrey said, “Part of our investigation right now is in the existing structure. As Steve [Himes, the university’s Senior Project Manager, also at the meeting] said, we’re doing a lot of investigation, a lot of surveys. One of the reasons we were doing a geo-technical investigation around the site [is] because there will be utilities that we may need to improve – relocate in the east parking lot as well as around the stadium. So that was the nature of the soil borings.”

Humphrey said, “We’re also surveying the existing facility,” adding there are most likely some parts that will have to be demolished.

“But we’re still kind of evaluating the entire existing facility as we look towards how it will adapt,” she said.

Carl Bova, a longtime resident of the area as well as a professional engineer, asked Northwestern officials if it is safe to say, with the long run-up on design, that neighbors will not have to worry about construction taking place this year.

“It’s safe to say, absolutely,” added Himes. “I like to put it this way: There’s always two creations, designing construction projects. There’s the design, right? You’ve got to think it up, in all its detail first. And then the second creation is actually building, so yeah, there’s a long road ahead of us.”