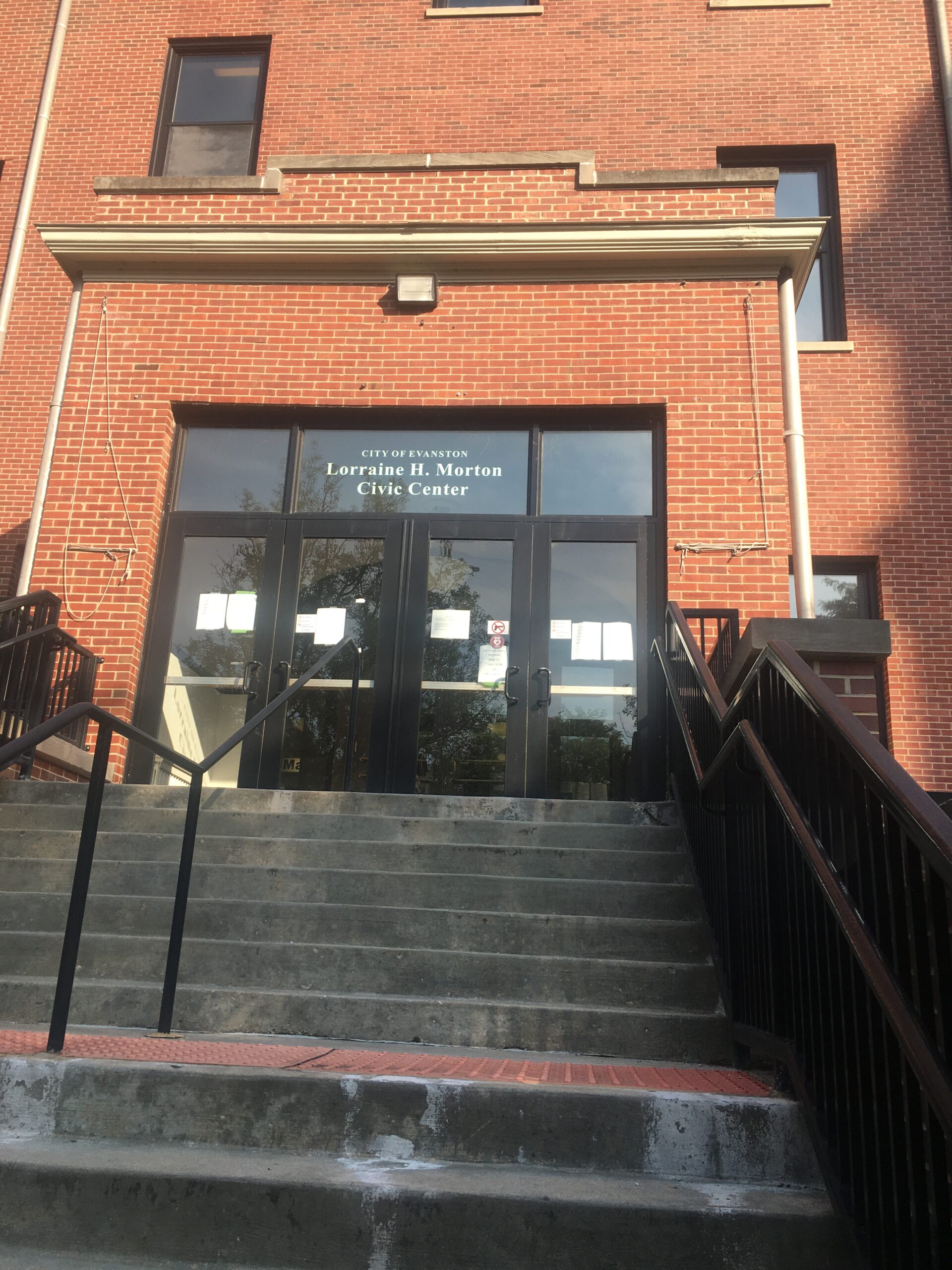 By Bob Seidenberg
(rseiden914@gmail.com)
Parks versus operations buildings (like the water plant)?
Community centers versus municipal buildings?
Police and Fire buildings versus libraries?
Jesus Lardizabal, a consultant with Altura Solutions, reviewed some of the choices with Evanston resident Amanda Zrust, preparing to take a survey on which city facilities need the greatest upgrades for accessibility.
Zrust, 35, who uses a metal mobility device to get around, had dropped in at the Levy Center November 18 for officials’ first public workshop on an Americans with Disabilities Act (ADA) transition for city parks and facilities.

Lardizabal had barely finished his list and was talking about accessibility for those who drive versus those who use transit when Zrust broke in. She is a transit user, getting on and off at stations, using restrooms and of course, the elevators. “They have to mop out the elevators every day,” she said. “They are disgusting.”
“So then you should cast your vote for it [as a priority for change],” Lardizabal suggested.
The city in May approved a $155,000 agreement with Austin, Texas-based Altura Solutions to serve as consultant on the project. Title II of the Americans with Disabilities Act, which took effect January 26, 1992, requires state and local governments to make their programs, services and activities accessible to people with disabilities, noted Stefanie Levine, the city’s Project Manager, in a memo.
“As such, the City of Evanston is required to conduct a self-evaluation and complete an ADA Transition Plan, which identifies existing obstacles limiting accessibility and describe steps that are to be taken to ensure that facilities and elements within the public right of way are made accessible to all individuals.
“Between 2001 and 2005, City staff conducted internal ADA evaluations at a number of its buildings and parks,” Levine wrote. “Since that time, many ADA and other improvements have been implemented, rendering the current evaluations substantially out of date.”
In 2012, the city conducted an ADA Transition Plan Update that relied on earlier building and park evaluations but did not take into account right-of-way issues, ensuring that facilities and elements within the public right-of-way are made accessible, according to Levine’s memo.
Altura, in its update, was directed to identify any plan gaps, such as in rights-of-way, new properties, updated regulations and new programs or services, Levine wrote, “in an effort to plan for and implement ADA improvements in a comprehensive manner.”
Community participation key
Breaking down the firm’s job even further, Lardizabal said Altura’s role is to look at all of the city’s facilities and programs in an ADA update to see if they are meeting standards, “and if they’re not, to then develop a schedule to achieve accessibility.”
“And that is what we’re trying to do now,” he said at the November 18 workshop, where display boards placed around the room outlined the steps.
“We’ve looked at 126 facilities, looking through programs and services – and that means everything from the website, to how they deliver utilities, parks programming, all of that,” he said.

Starting in September, Altura sent out two-member teams to inspect every single facility and identifying possible barriers to accessibility.
Some examples? “A drinking fountain too high, a grab-bar missing, doors too hard to open, water closets [toilets] too high,” Lardizabal said. Those are items one finds in buildings “that aren’t necessarily unique to Evanston,” he said.


An ‘us, not them’ attitude: Patrick Hughes
At the workshop, Evanston resident Patrick Hughes, the founder of Inclusion Solutions, a firm that works with businesses and government to find solutions on ADA issues and a path setter in the field himself, said the update is needed “to help [the city] go to the next level.”
“I don’t want to be too critical,” Hughes said, “but I think disability is often a piece of the puzzle that can easily just be neglected, if you don’t make it important. And I’m grateful there’s a federal law that requires us to do this because I’m not sure that we were necessarily ready to do it.”
He said he likes the approach Altura has taken so far in working with the city – “how they’re looking at it and almost personalizing it,” he said, “where it’s not about ‘those people over there,’ but it’s us.”
Hughes said that, according to a national statistic, 25% of the people in a community have some kind of disability. “What that means in Evanston [with an estimated population of 74,587 in 2019] is that we have 18,000 people with disabilities,” he said. “And my question to anybody is, ‘Who are these folks, and are they doing OK?’” 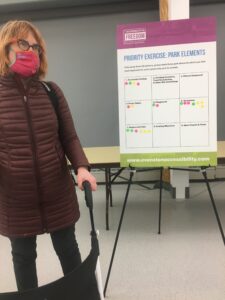 Amanda Zrust’s story
Amanda Zrust would probably be the first to say it has not been a cakewalk for her, since learning she was dealing with a debilitating illness around 10 years ago. But she shows pluck, and not a little bit of humor, as she talks about her own situation.

Would you like the whole story? It’s a good story,” she says, as a reporter delicately navigates on why she was at the accessibility open house.
“OK,” she began, “so when I was OK,” she began, “so when I was 26, I went on a 300-mile backpacking trip.
“Good for me. So I did that and then I got off the trail and my eye went crazy. And I was like, ‘I guess I need to go the doctor and figure that one out.’ And the doctors were like – after all the MRIs and whatnot – ‘You have MS,’ and I was like, ‘Wonderful.’
“And at the time, I was just fresh off the trail and was like, ‘Whatever. We’ll see what, it’ll be fine,’” she said. “But, you know, 10 years on, the mobility has gone a little bit downhill.
“It’s an adjustment,” she said. “But that’s why, when I see proposals of how to make pumps [water pumps for gardening], etc., more accessible. I’m like, ‘Yeah, guys. I think getting outside is really important. Obviously, that’s like my history. I’ve worked on farms. … I’m not going to do that exact thing [but] I still want to go outside and garden, whatnot. So having some kind of access – I should tell them they should make accessible community gardens … with high, high raised beds.”
Crown parking an eye-opener
She returned to Evanston about a month ago and has worked at a temp job while looking for something more important.
Back home, she visited the new Robert Crown Center at Main Street and Dodge Avenue to pick up books from Crown’s library “and their handicapped parking is farther away from the building than their not-handicapped parking,” she observed.
Later, as “I was talking to the Robert Crown people, I was, like, ‘Why is your parking so crazy?’ and they were like, ‘You should go to this [open house].”
She made good use of her time at the Levy Center event, filling one of the display boards with purple sticky notes, suggesting improvements, even some for sites that fell just outside the city.
Like at the Howard el station, the elevator from the parking garage does not stop flush with the floor,” she offered. “So that’s annoying to have to like lift this thing [her mobility device] in there; it’s like a low curve. Basically, it’s like manageable, but it’s annoying.”

One of her purple notes concerned the city’s street-cleaning system: “Evanston needs to cool it on street-cleaning, making people constantly move their car back and forth – sucks w/Disability,” she wrote in pen.

“I’ve got a disability like a lot of other Americans and I’m not special,” Zrust stressed. “I really don’t think I’m special. Like, yeah, it’s frustrating, like, obviously, but it’s manageable and the most frustrating things are the built environment sometimes, where you’re like, ‘Why is that? Why is that door hard to get through?’ … If it doesn’t have a button to open, that’s annoying.”

One of her other stickers noted: “1/4 Americans experience disability. Accessibility benefits EVERYONE.”

“I can, like, go to physical therapy and make some improvements, but it’s not perfect,” she said. “But when really basic things like the bathroom isn’t accessible, it’s just off-limits to go outside. …”

“I’m not hanging around using a wheelchair, but maybe I’ll get to one,” she said.

“And I think one of the biggest frustrations for people with that kind of mobility device is a lot of times a lot of stuff is really designed for people that can walk around as fast as they want.”

“Maybe we should make everything,” she said, pausing, “more usable.”

The city has created an online survey for residents to share their vision for a more accessible Evanston; it incorporates information from the November 18 workshop.

The city says the Accessibility is Freedom: ADA Transition Plan Update “will create a blueprint for Evanston to enhance accessibility throughout its parks, municipal facilities, sidewalks and intersections, and programs and services well into the next decade. The process will ensure everyone in the community – no matter their ability – can fully navigate Evanston’s public spaces and activities.”