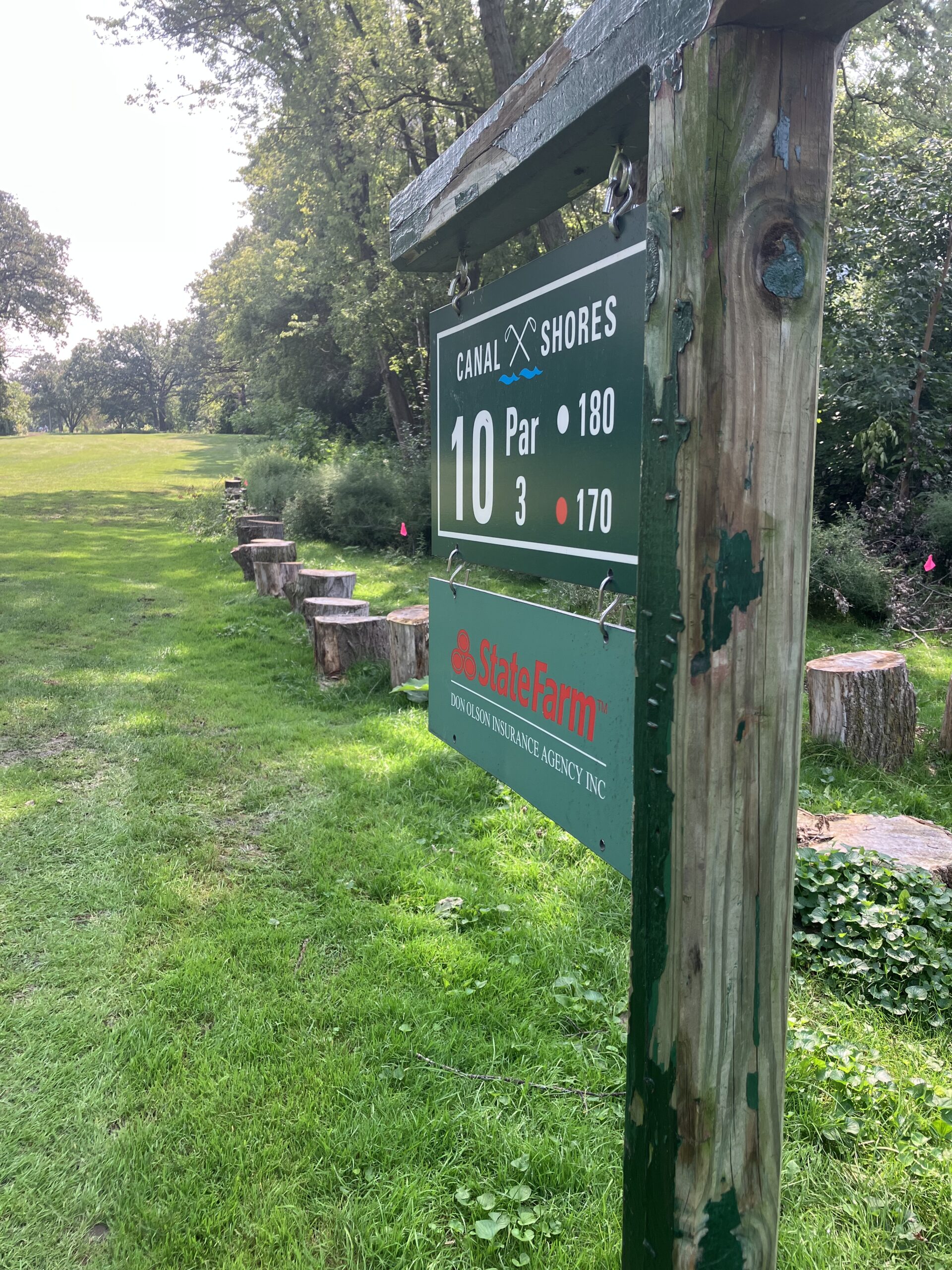 By Bob Seidenberg
Evanston City Council members have registered an objection to a Wilmette landowner’s latest attempt to seek an easement over a part of the Canal Shores Golf Course to allow access to his landlocked space.
At the Sept. 12 meeting City Council meeting, members voted 8-0 in favor of a resolution officially registering the city’s objection to a roadway easement request on land owned by the Metropolitan Water Reclamation District and leased to the city.
The resolution maintained that the request filed for a possible roadway would have a detrimental effect on the design of the golf course and be inconsistent with missions of both the city and the MWRD to preserve open space.
The Keefe Family Trust, the property’s owner, is seeking the easement to build a roadway to run north from Isabella Street across the golf course to the property, located just across the border from Evanston.
Addressing the City Council at the Sept. 12 meeting, Joseph Keefe, a representative of the family trust, said the family has entered into an agreement to donate the property to the Housing Opportunity Development Corporation to be developed into affordable housing. An HODC official confirmed Sept. 19 the two are in talks.
“My efforts to gain access to our property are devoted to  that purpose,” he told council members. “Currently the property is landlocked. And the easement we seek will relieve that condition.”
In November 2018, the Metropolitan Water Reclamation District Board, in a 5-4 vote, approved the Keefe’s family’s request for an easement that would allow a 426-foot road to run from Maple Avenue in Wilmette to Keefe’s 1.1-acre property.
The hearing process leading up to the decision was a highly contentious one, with nearly two dozen members of the public speaking in opposition before the board’s vote.

At  the Sept. 12 City Council meeting, Keefe said that Wilmette village employees suggested that he explore moving the easement south to Isabella, further working on the issue after the MWRD decision.
He said the heritage trees along the fairway of the course would not be affected by the move and said the easement along Isabella will use already engineered space.
Change may lead to removal of oak trees
But Matt Rooney, vice president of the Canal Shores Board, speaking before Keefe during citizen comment said that Keefe “is trying to make himself into a hero” in the change, when that’s not the case.
“What’s he’s actually doing is making it so that the green gets moved back further from where it is now,” resulting in it going in the narrowest part of the fairway, he told Evanston City Council members.

Because of the change, “we will not get enough sunlight and we would have to take trees out in order to put it there,” he told council members. Keefe “wants us to be the ones to take out the trees instead of him. If he comes in from the side of the south (on the roadway) and we have to do that, we will end up taking out four or five large white oak trees, which are ecologically the most significant trees in the area.”
With the previous agreement for the Maple easement, the developer would be be coming in from the north, not through Evanston, Rooney said.
“If either of these easements take place, it’s going to be bad for the course,” he predicted. “And with the second one, the one he’s asking for tonight, coming in from the south (off Isabella) is worse than the first,” he told council members.
‘A unique haven for birds and wildlife’: Revelle
During discussion of the issue, City Council Member Eleanor Revelle, in whose 7th Ward that portion of the golf course is located, echoed Rooney’s comments.
“This may sound familiar,” she said to council members of the proposal, “because this is the third time that a roadway across MWRD property has been proposed.”

She said as a part of the first, in 2017, a roadway was requested that would cross Isabella Woods, an area of undisturbed forest “with 55 mostly mature trees, a local haven for wildlife which diverts thousands of gallons of stormwater from the city’s combined sewer system.”
That one was denied by the MWRD. Then came the 2018 request, concerning Maple.
“And now we’re considering a third roadway in this ecologically important area,” she said. “And it’s important to say a word about the Keefe property itself. It’s not just an empty parcel of land. Like Isabella Woods, the Keefe property contains remnant forest of swamp-like oak trees that provide a unique haven for birds and other wildlife. It’s also a seasonally inundated wetland that provides valuable ecological benefits, including storage for stormwater and (as a) habitat for a variety of wildlife.”
‘Far less negative effect’ than car parking on course: Keefe
The resolution approved by the City Council called Canal Shores, a community golf course that runs through Evanston and Wilmette, as a popular place with a wide variety of uses other than golf – including walking, birdwatching, running and cross-country skiing.

A roadway off Isabella in Evanston “would pose significant safety hazards to pedestrians and cyclists” traveling along that street, the resolution says.
Further, “the roadway would have a detrimental effect on the design of the golf course – and specifically the area available for the 10th hole – which includes a delineated wetland and several delineated wetland and several giant oak trees.”
But Keefe, in his remarks, told Evanston City Council members that the easement approach as designed will not require the removal of trees, shrubs or other plantings.
The course at Isabella already contains a curb cut, and that entrance is used for maintenance  machinery.
“The visible approach will traverse already engineered land and will not disturb pristine or heritage grown in that area,” he said.
“Canal Shores is certainly a valuable community partner in the city of Evanston and a great steward of the open space property enjoyed by many people over the years,” he said, echoing language in the resolution.
But Canal Shores “is also a private business,” he said. “It’s a nonprofit with its own goals and missions operating on public property.”
He said that during the golf course’s normal operations, “Canal Shores parks thousands of cars each year on unpaved property. It would seem unusual for Evanston to permit this use of dozens of acres of open space while opposing a  far less negative effect on existing green space.”
As for the safety concerns the easement might pose, Isabella along Canal Shores is currently bisected by five streets, and 17 roads run parallel to the golf course, he said.
The proposed roadway would be identical in use to those streets, he said. Further, the roadway would adhere to the water reclamation district’s stormwater management ordinance, he said, answering another concern included in the resolution, and make use of the drainage systems the district already has in place.