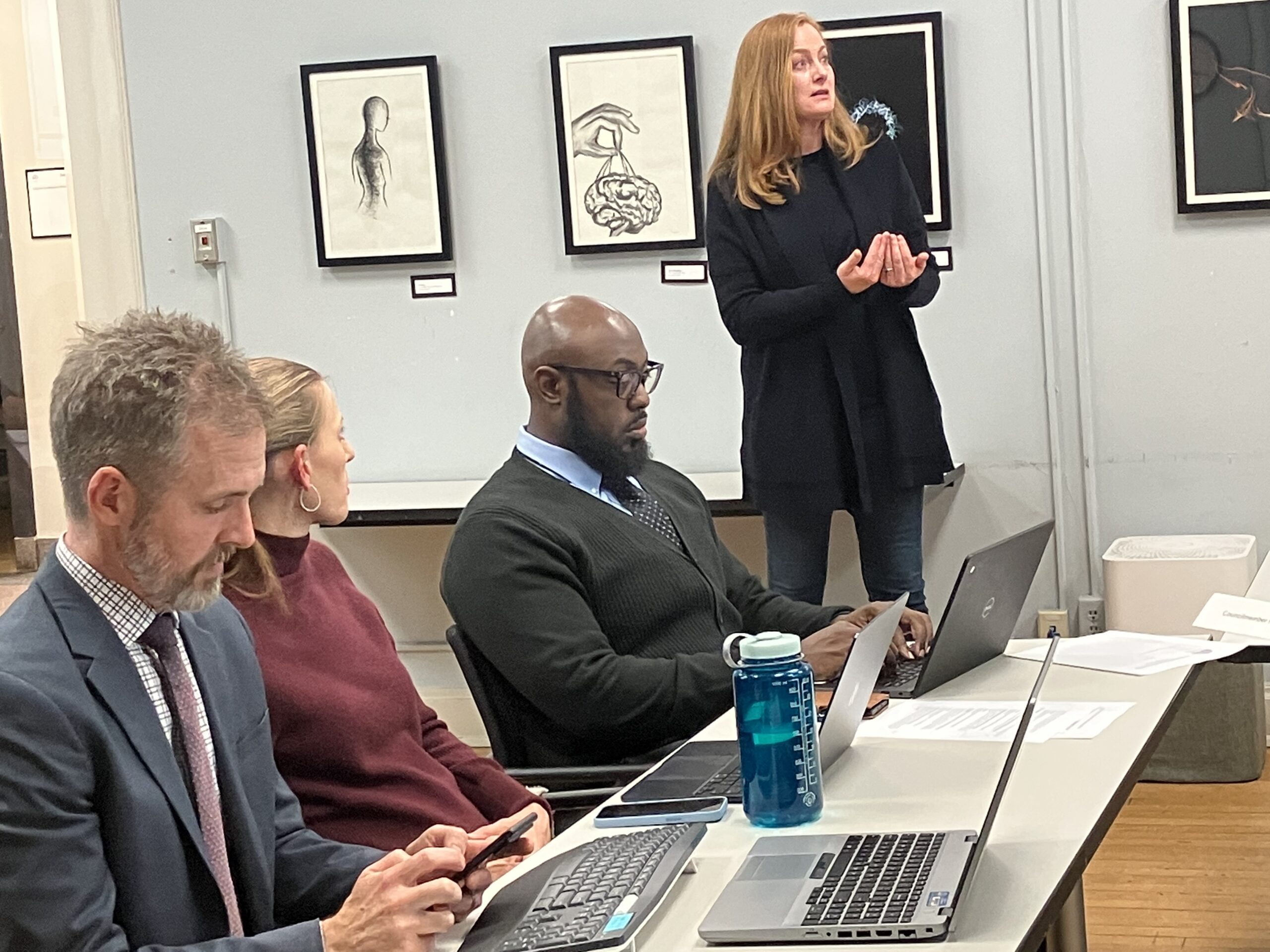 By Bob Seidenberg
rseiden914@gmail.com
One is a popular ice cream store and small grocery on the corner across from Evanston Township High School. The owners, currently tenants, would like to purchase the property and make it a “Mecca” to surrounding businesses.
Another is 27,000 square feet of vacant space that sits next to the Autobarn car dealership on the other part of the city.
The owner there has been looking for years to relocate here manufacturing facility, commercial kitchen, rolling out healthy treats.

Evanston Economic Development Committee (EDC) members recommended in favor Nov. 30 of major financial assistance for the owners of two businesses, looking to go to the next level.

At the Nov. 30 meeting, the committee recommended:
— $560,000 in West Evanston Tax Increment Finance District funds be allocated to Clarence and Wendy Weaver, owners of C&W Market and Ice Cream Parlor at 1901 Church St., to support their plan to acquire and renovate the building.

— Backed a request from Whole & Free Foods for $550,000 in financial assistance to go toward the cost of completing improvements for a commercial/manufacturing kitchen behind the Jewel Store on Howard at 2021 Autobarn Place.

The Weavers were seeking TIF assistance to acquire the building at 1901 Church St., where they are currently tenants.
The Weaver’s original request of $634,250 amounted to 41 percent of the project cost, Paul Zalmezak, the city’s Economic Development Committee manager, pointed out in a memo.
Zalmezak wrote that “the city investment closes a financial gap for the Weavers who intend to improve the property to create six newly renovated apartments in addition to building improvements including roofing, HVAC, and plumbing.”
C&W Market opened in 2014, at a corner spot at Church Street and Dodge Ave., across from the high school and joining two barbers shops, a beautify supply shop, and a restaurant, Zalmezak noted. Six apartments are on the upper floors.

Clarence Weaver told EDC members that he and his wife has added improvements at the property, including security features, during their time as tenants but there’s a lot to be done.
“What we wanted to do was establish a small mecca for minority-owned business where the opportunity to continue to grow still exists.”
In discussion, Council member Devon Reid, 8th, said that he’s not usually enthusiastic about public money going to a private business. “I see this Committee do that a lot.”
He said the Weavers, though, “have shown to be an integral part of this community,” and in fact, “are a shining example not only what it means to be a corporation but a corporate citizen, if you will.
He noted the project includes a component for affordable housing.

Second Ward Council member Krissie Harris said she too struggles with the idea of providing funds to private businesses. “But this is business that gives back to the community probably much more than we would bee giving them.”
During Covid, she said she’s been in the store when people didn’t have the means “and they let them walk out with the item. So they give back to the community. They have been a beacon on that corner,” she said.

EDC member Lisa Dzeikan observed that C&W has served as a strong gateway to the whole corridor at its site, “so having a strong presence there and having a strong anchor there that is able to maintain and be able to support that property.”
At the same time, she said, she took to hear staff noting that request amounts to over 40% of the total project cost.
Paul Zalmezak, the city’s Economic Development Manager, had noted the importance of
“remaining conservative on TIF investment guidelines (i.e 25% maximum) to allow for TIF investment in infrastructure and higher impact projects that will bring higher numbers of affordable housing units, property tax revenues, etc.
Examples include the Emerson / Jackson properties, the Housing Opportunities Development Corporation Mt. Pisgah (a mixed use project, including a new church) at Church and Darrow, and several opportunities in early stages along Emerson and the vacated Mayfair rail line,” Zalmezak said in his memo.
Based on that viewpoint, Dziekan told committee members “I would be comfortable and in support of funding this closer to 25%.”

Council member, Jonathan Nieuwsma, 4th, chairing the meeting, echoed the importance of the business at that location.
Committee members agreed on $560,000 as the level of assistance, with Dziekan casting the lone no vote.

Trish Thomas’s efforts to find a home for Whole & Free Foods goes back years, and includes previous appearances before the city.
Her request totaling $550,000 is a portion of the total project cost of $11.350 million, which includes $3 million in leasehold improvements to accommodate approximately $8 million in commercial kitchen equipment, Zalmezak said.
An Evanston resident, Thomas teaches entrepreneurship at Northwestern University to help startups.
She’s found —whether $25,000 or a half a million dollars — there are lots of people who will fund machinery, capital equipment, those kind of things,” she told Committee members, but they won’t on the building.”
Eighty percent of the company is black; over 47% of our production (team) has never held jobs,” she told Committee members. “We had every single person in our production team impacted by gun violence.”
She estimated that she looked at 50 properties before landing on Autobarn.
Then one morning driving past the Nissan dealership on Chicago Avenue one morning, “it was like wait a minute, that’s for sale.”
She ended up meeting talking with Richard Fisher, owner of the Autobarn.
“Anyone know Richard Fisher?” she asked Committee members about the owner of Autobarn. “He makes deals. That’s what he does.”
Chicago Avenue was out, but Fisher invited Thomas to look at the Autobarn at 2021 Autobarn Place, behind the Jewel.
“It’s not a perfect space,” said Thomas, lacking docks. “”But it is place to start. It gives an anchor for what we wanted to do.”
In Chicago, Whole & Free Foods production facility is 8,500 square feet, restricting production to one cookie sheet at a time.
At the new location, she said, “we’ll be able to do in one hour what it takes two weeks.”
EDC members voted 6-2 to recommend to the Council approval of Whole & Free Foods request.
EDC members Eli Klein and Council member Bobby Burns, 5th, voted against, both speaking in support of the program but noting the uncertainty of American Recovery Plan Act monies.

‘I’m torn honestly,’’ said Klein, “because it’s a wonderful project. I think that I have every confidence that they’ll be successful; that it’s a good investment. But the fact that it’s ARPA funding, when we’ve already been talking about, “will we have enough left in February to implement any recommendations from the Evanston Thrives study (looking at upgrading the city’s retail districts. You know, it’s it’s, it’s a little worrying.”

Council member Bobby Burns said he could support voting in support of “up to $550,000,” but not committing to the full figure.
“We have to know if there is more ARPA funds available after the 12th. We have a lot of priorities that we need to consider. And I would need the time to consider all those before we determine the final dollar amount.”

Council member Devon Reid, 8th, in whose ward the site is located, argued in support of the full amount.

“I do think given the number of jobs, decent-paying jobs — , particularly with the newer jobs that are gonna require a bit of training and education to operate this machinery… I think this is certainly a worthwhile investment.”