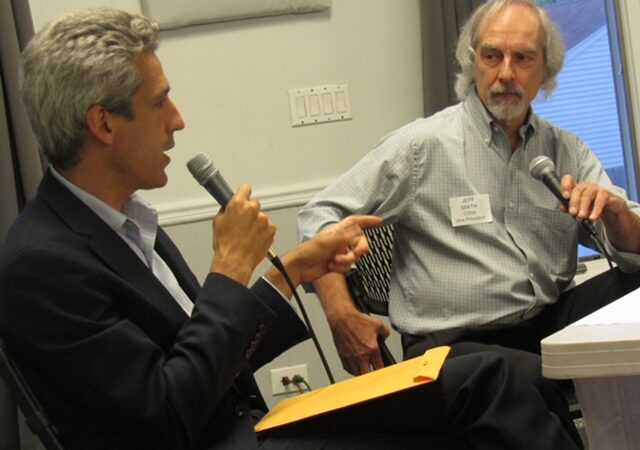 Members of the city’s Redistricting Committee previously agreed not to make any changes to the city’s current ward maps before a special election is held next April to fill two open Council seats.

Elections for the city’s south Ninth Ward and now centrally-located Second Ward seats are expected to be held at that time  and “we don’t want to confuse people by releasing the new map before that election,” Council member Jonathan Nieuwsma, the chair of the committee, explained at a virtual town hall meeting July 13.

But one of the community members at the meeting, Jeff Smith, an attorney and longtime Evanston activist, argued there’s compelling reason to have a  new  map in place before those elections.

“How can it take only six weeks to come up with a city manager who might be here for the next decade, but we’re going to drag out an unconstitutional map for another year and elect two more Aldermen,” said Smith, also president of the Central Street Neighbors Association.

With the information already available to the city, “it seems to me that we have the technology and the ability to have a map that meets the requirements of compact, contiguous and is considerably less gerrymandered than the map we see right now,” he said.

Smith was one of close to 30 people logging in to the virtual town hall meeting the Committee sponsored to kick off the public process of redrawing the City’s ward boundaries.

The Committee, formed earlier this year, has the task of updating Evanston’s ward boundaries to ensure residents have equal representation on the Council. 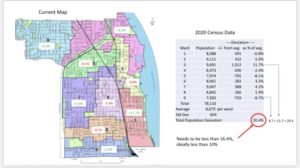 To test that claim, he did a quick online survey of the participants at the meeting, asking they vote with a thumbs-up if they favored moving ahead.

“I see it’s all thumbs,” he said after the instant survey. “Not a surprising conclusion.”

Recapping the Committee’s work thus far, “we came to the clear conclusion that, yes, we do need to redistrict, and we’re launching this process to make sure we’re doing that,” he told his online audience.

“We have also concluded that it’s important to continue to have at least three wards that are majority non-white,” he said. “And we also talked about our philosophical approach — are we going to throw the map out and start over? Or do we want to try to keep it simple and just (tweak) some borders here and there so we can make these numbers match as evenly as possible. And as long as we’re meeting our demographic requirements and the other requirements that we have yet to discuss,  we can maybe get to where we’re going going without much pain and angst.”

Smith recalled that while still in law school, he was part of a legal team in Texas, working to ensure that African-American and Latino voters had a fair chance to elect representatives of  their choice in areas with gerrymandered legislative districts.

“I believe fiercely in the right of everybody and especially those who have been discriminated against to have a fair chance to elect representatives of their choice,” he said.

At the same time, he said, “we probably shouldn’t draw lines along consideration of race  unless there’s a demonstrated pattern of what’s called racially-polarized voting,“ he said, “such that doing (so) would impede the fair chance of a group to elect a representative of its own choice, which doesn’t necessarily mean a representative of the same racial or ethnic background.”

“To start using racial boundaries or perceived demographics of racial groups as a criteria, unless you have demonstrated racially-polarized voting in respect to particular groups, particular areas,” he maintained, “you’re really starting to tread on something that’s the opposite of what is what is constitutionally mandated.”