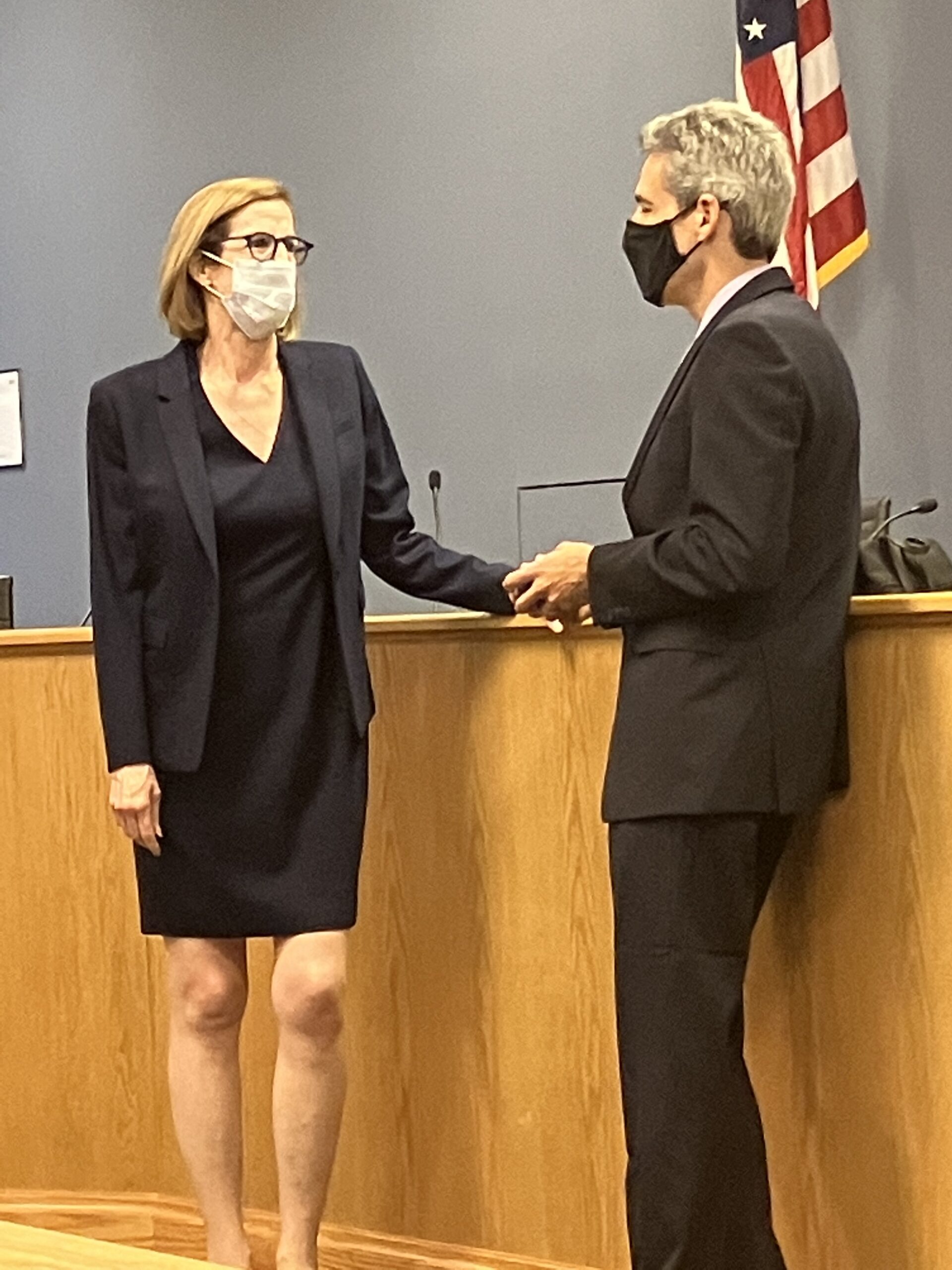 Evanston City Council members are next up, deciding where they stand on city of Urbana administrator Carol Mitten as the city’s next City Manager, in a process that has already resulted in two failed searches.

Council members had shown the requisite amount of support for Mitten as their lone finalist in order to  move forward with their Town Hall meeting July 28 where Mitten was introduced  to the public.

But a group of local activists have mounted a strong opposition campaign to Mitten’s selection aimed at Council’s members backing off  their support.

Activists have circulated criticism of Mitten, some of it from one website in Urbana, raising concern about her positions on Open meetings, transparency, policing and racial issues.

Community Alliance  for Better Government, the group leading the campaign, has urged members on social media to contact alderpersons and urge them to vote no on Mitten’s appointment.

The activists, under 20 in number, turned out at the Town Hall meeting, rallying beforehand and supporting “No Mitten” signs.

Many of the questions Mayor Daniel Biss, asked Mitten at the two-hour meeting, reflected their concerns.

Audience members broke into Biss’s questions at points, demanding they get to ask Mitten questions themselves.

Following the meeting, Mitten sat down with a small group of activists remaining in Council chambers, attempting to address their concerns.

The extraordinary exchange went well beyond what candidates in the city’s previous searches had done.

Council members are scheduled to meet today in  a closed special City Council meeting in which personnel is expected to be discussed.

The next regular Council meeting is scheduled for Monday, Aug. 8, where discussion or vote of the city manager hire could come up.

A minimum of six Council members would have to vote to confirm Mitten as the city’s next City Manager.

With the Second Ward Council seat currently vacant, nine Council members will be voting, including the Mayor.

Evanston has been without a permanent city manager for ten months, and two previous searches funded by the city failed to produce a final hire.

The city of Urbana had gone without a city administrator for  eleven years before Mitten was Mayor Diane Marlin named Mitten to the position in April 2018.

Mitten declared at the time that she was not walking in the door with changes to make but rather saw herself as a coach. She hoped to bring leaders in the administration together to work toward  common goals.

”I think Carol was a great city administrator,” she said in a phone interview before the Town Hall meeting. “I’m sorry she’s leaving Urbana. I wish she wasn’t.

Hursey, whose father was Urbana’s first Black Counsel member, said Mitten helped her in her research for a resolution in 2021 committing to end structural racism and racial equity.

The resolution speaks of the segregation and racial oppression that became especially acute after World War II, following the increase in the black population of Champaign-Urbana and predatory real estate practices that excluded African-American residents from white neighborhoods.

“I actually used Evanston as a template,’’ Hurley said.

Of Mitten, she said, “I think she’s a straight shooter. She’s a policy wonk.”

Evanston activists have circulated articles coming out of one website in Urbana, casting a critical light on Mitten issues transparency, policing and racial issues.

Hurley maintained that the much of the criticism that legislators in Urbana have experienced as well has been “cherry picked,” “misleading,” and not reflective of how government is run.

“I was surprised when I was elected how these people showed up and just yelled at you,” she said. “We can’t have a city run by a small group of people who…complain and scream but don’t have any solutions to .anything.”

”This isn’t a Game of Thrones,” she said during the interview. “People seem to think of it that way.”