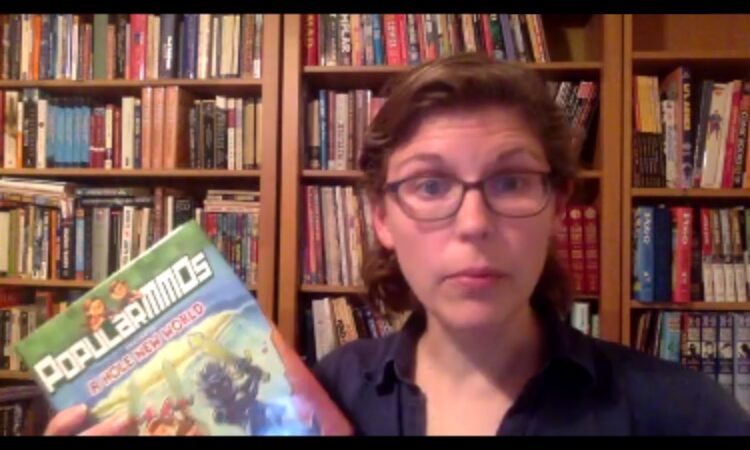 By Bob Seidenberg
PopularMMOs Presents A Hole New World” may not strike an immediate chord of recognition.
But the stars of the children’s book, Pat and Jen, who do battle against zombies, have a huge fandom.
The book, published by HarperCollins, is a spinoff of the Popular MMOs YouTube series, which has some 18 million subscribers and 10 billion combined views, said Betsy Bird, the Evanston Public Library’s Collections Manager, addressing Library Board members at their Oct. 20 meeting, which was a hybrid of a virtual and in-person gathering.

That’s what you learn if you read the back of the book,” said Bird, addressing members of the board. “But what turns out is the series is very problematic.”
“Every problem in this book,” she said, holding the book up, “is a problem with the series that it’s based on. There is a Black character named Carter. In the series he is supposedly of a nondescript race but here they decided to make him Black. Carter is described right from the start as ‘not very smart,’ and perpetually throughout the book that is reiterated.”
The book also contains a character named “Evil Jen,” Bird said.

Evil Jen looks exactly like Jen in every way, shape and form, but she has big lips. Because she has big lips she has been teased her entire life and she realized there was a beautiful version of herself who did not have big lips.”
Bird told board members she had spoken with HarperCollins about the racially tinged passages and “they assured me that no one has ever brought this up with them before.”

The problematic nature of the book was brought to the attention of the Library’s Collections Advisory Committee, which was created in 2020 to advise and aid in the purchase of materials to better serve the Black community.
Background of the purchase
The book, by Pat and Jen from PopularMMOs and illustrated by Dani Jones, was published in 2018, part of a graphic novel series based on the Minecraft YouTube series, Library Director Karen Danczak Lyons said in her report for the meeting.
One copy of the book was purchased in 2019 for the main library, she said. The book did not have any professional reviews, she reported, and it is possible that it was either purchased in response to a patron request or because it was a New York Times bestseller at the time.
(HarperCollins does currently have a single review of the book on its website from the School Library Journal Review which describes “A Hole New World” as an “action-packed adventure” that “is also a coming-of-age story. The duo meet friends and foes, face fears, and learn about honesty, self acceptance, and how our choices affect others. Jones’s simple and bold illustrations, reminiscent of characters from the Sunday funnies, will spark interest and creativity in young readers.”)
In her report to the board, Danczak Lyons said officials delved further into the book’s background.

“After some research, we have discovered that many of these problems already exist in the online YouTube series as well,” she wrote. “It appears that ‘Pat’ has used the n-word in the past. In the video series the character of Carter is of a nondescript race. This was changed to Black for the book. Other staff members have located the sequels to this book and have discovered just as many racist elements.”
(HarperCollins representatives did not immediately respond to emails sent out Friday seeking a response to the comments.)
In her report to the board, Bird said, “This book is owned by every library in the surrounding area. And yet why is this the case? Why was this a New York Times bestseller, and how did it get past us?”
More immediately, the book is currently part of the library’s collection, and there are sequels, “which if you look at them are also equally bad,” she said. “What do you do about those?”
Discussion sheets and QR Codes
Library officials are looking at a range of possibilities, she said. They include having the Library’s adult graphic novel book club lead a discussion about the book’s content.

Another approach could involve insertion of a discussion sheet with a statement inside children’s books with problematic content.
The sheets could be placed at the beginning of the books, offering parents a way of talking about the books with their children.
The sheets would contain QR codes as well that would take library patrons to library web pages that provide resources and context, officials said, explaining why these books have to be discussed.
“This way the book isn’t just swept under a rug,” Bird suggested to Library Board members. “If we get rid of this book we basically are just trying to sweep away our problems.”
Central to library’s role or serving cover of white people?
In discussion, Library Board members offered different views on whether that was the way to go.

Board Treasurer Benjamin Schapiro, a former library director in another suburb, spoke in support of the idea.
He said the suggestion places the library “back in the center of our role” to facilitate discussion around difficult issues.
Board member Esther Wallen liked an idea of board member Shawn Iles of “bringing people to the table to discuss” a certain selection.
“I think that’s something that got missed in this case and so if we can include that in the process I think that would definitely help,” she said.
But veteran board member Margaret Lurie asked where you draw the line on books selected for special attention.

“Since I’ve lived in Evanston and since this library has existed,” she said, “there’s been anti-Semitic material on the shelves,” that nothing has been done about, she said.
“There’s 10 copies of ‘Mein Kampf,’ there’s the ‘Protocols of Zion,’ there’s T.S. Eliot, Roald Dahl, ‘Daniel Deronda’ [a novel], ‘The Merchant of Venice’ – I mean, these are just a few that I found. No one can ever complain about those because I thought the library believed in the First Amendment – in the freedom of speech, in the freedom of the press.
“It bothers me that we’re protecting people from books,” Lurie said.
Bird stressed that officials weren’t talking about removing anything. She said they were talking about providing information in the front of the book and through the QR Code to “give people something to talk about and start a conversation.”
“The library bought 10 copies of ‘Mein Kampf’ and no one would say that book wasn’t anti-Semitic,” Lurie responded. “Where was the group that vetted that book?”

Board member Russ Shurbet, while saluting the initiative behind the idea, expressed concerns about the approach the library would be taking.
“Unfortunately, this idea is serving the cover of white people,” he said.
He maintained the idea is using “the dehumanizing of Black people to give white people a learning opportunity. And that is something, a road I do not believe we want to go down.”
He proposed a complete audit be done of all the children’s books in the library’s collection.
“Every book put on our children’s shelf should be great,” he said. “ We can do this through volunteers who want to read, board members who can help. But this is serious,” he said.
As for next steps, Bird said Library officials would like their internal Equity Diversity Initiative Committee to go over the Library’s current policy and compare it with other policies that have been changed around the country in response to similar situations. Eventually, she told the Library Board trustees, community members will be brought in, such as the Collection Advisory Group to get their feedback, “maybe [see] where we have gaps – what we’re not addressing, things like that – so that we can have an updated policy that actually meets the needs of our patrons today, not six years ago, not 10 years ago.”
Bird said she expected to be back before the board with a recommended policy in two months.