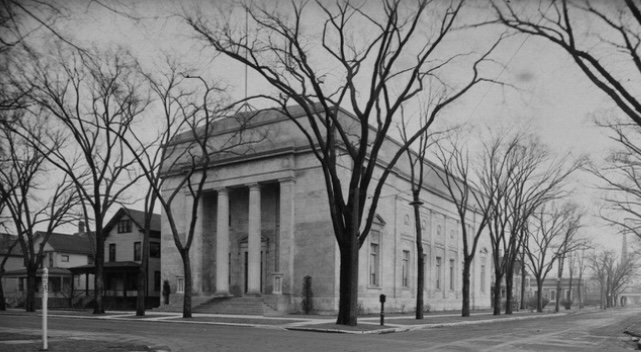 By Bob Seidenberg
Evanston’s Masonic Temple, a local landmark that has sat vacant in recent years, will see new life as a residential apartment building after backing from the Evanston City Council on Jan. 9.
Council members approved as part of the meeting’s consent agenda a request from Myefski Architects for variations from the number of units and parking spaces required by the city’s zoning ordinance.
The temple, 1453 Maple Ave., was one of a number of major buildings that sprang up during Evanston’s building boom of the 1920s, and harkens back to a time when fraternal groups such as the Masons flourished.
The building was designed in 1926 by Holabird and Roche in the Classical Revival style, is a locally registered landmark, and is regarded “one of Evanston’s most intact and significant institutional resources,” staff wrote in a memo. In a 1972 statewide architectural survey, the building was listed as eligible for the National Register of Historic Places.
The developers sought major variances in their application, including an allowance to build beyond the 14 dwelling units permitted under current zoning ordinance.
The developer requested a variance to provide 24 units, three of which would be affordable under the city’s inclusionary housing ordinance (IHO) guidelines. The total number would climb to 30 with the six bonus market-rate units (two per IHO unit) as reported.
Staff argued against a condition recommended by the city’s Land Use Commission, which called for the developer to lease an additional five off-street parking spaces, for a total of 15 where 19 spaces are required by ordinance.


In a memo, Cade Sterling, city planner, pointed out that the Masonic Temple, similar to some other recent residential projects, is located in “a Transit Oriented Development area with a similar proximity to regional and local alternative and mass transit options and significant amenities within walking distance.
“As such, the subject environment does not necessitate use of an automobile and can support limited additional off-street parking as an adaptive use project capable of attracting individuals seeking a car-free lifestyle.”
Further, Sterling noted in the memo, the temple is located near an “underutilized parking infrastructure.
“The downtown particularly has substantial and underutilized off-street parking infrastructure,” he wrote, “while also retaining significant locations capable of supporting a reduced or eliminated dependence on the automobile in-part due to regional and local mass transit options – a condition extremely rare nationally.”
Sterling noted that several planned developments, such as the nearby 1571 Maple Ave., have recently received major adjustments to either reduce the number of required parking spaces and/or permit leasing of private spaces to the public, because of the abundant supply.