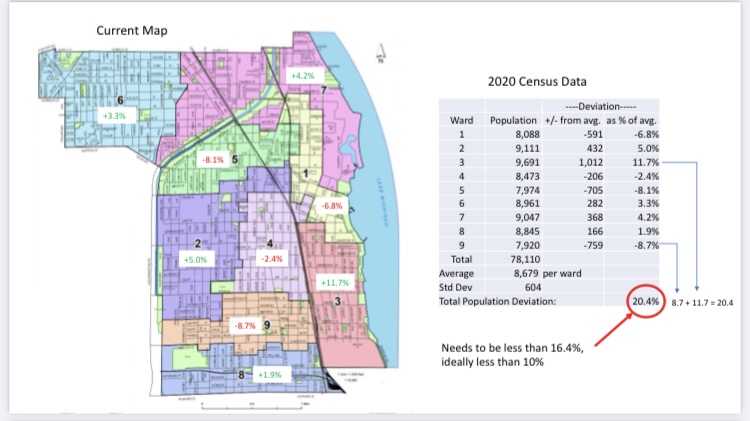 Evanston officials have seen smaller-than-expected turnouts at some recent events billed as town hall meetings over the past few months, including a recent one where residents were invited to weigh in on the attributes they would like to see in the city’s next police chief.

Members of the city’s newly-constituted Redistricting Committee are hoping to reverse that trend in a pair of meetings coming up, inviting residents to participate online in virtual town hall sessions tentatively planned for July 13 (in English) and July 20 (Spanish), from 7 to 8:30 p.m., each evening.

comment on the remapping of the city’s political districts.

Much as in the police chief search, the remapping of the city’s ward boundaries is not an everyday thing — the last real remapping took place in 2003.

But the exercise can be an important and challenging one with officials attempting to balance population across Evanston’s nine wards with the city seeing a population increase of 3,624 residents, according to the 2020 Census.

Further, citizen feedback could be key with even small  shifts in ward boundaries having the potential to affect long term constituencies and their influence on city decisions.

Currently, the wards are showing a 20.4 percent  difference between the largest ward, the Third, and smallest, the Ninth, according to 2020 census figures.

“So what we’re looking to do is balance the wards and get as close to even population across all nine wards,” said Council member Jonathan Nieuwsma, chairing the June 28 meeting.

Committee members are using as a starting point the criteria that officials cited in the 2003 ordinance establishing a new ward map at the time.

The list leads off with two weighty legislative benchmarks at the top — the U.S. Constitution’s 14th Amendment Equal Protection Clause, enjoining a state from drawing distinctions between individuals on differences irrelevant to a legitimate governmental objective; and the 1965 Voting Rights Act, which  prohibits racial discrimination in voting.

“The Voting Rights Act gets into such concepts as racial demographics and ensuring adequate representation for minority groups,” said Corporation Counsel Nicholas Cummings, offering committee members a quick primer on the terms.

“Compactness refers to districts being relatively compact, easy to draw a line around and not super gerrymandered —  as we are all aware has been done in many cases around the country over the years.” “Contiguity  refers to the fact that an individual Ward needs to be continuous with itself and it needs to be able to get from all points of a ward without leaving that ward.”

The wording “communities of interest,’’ may be a little misleading, he told committee members, “because communities here doesn’t refer to neighborhoods, but refers to populations of similar interest or interest groups,. So residential property owners, municipal taxpayers, lakefront property owners, commercial business interests, the student population. So as we continue our conversation here, we may want to enumerate some additional communities of interest,” he said.

“Protection of incumbents” also sounds different than it means, he suggested to committee members, all but Council member Melissa Wynne who are in their first term. The term, in this case, would suggest the new ward boundaries that neither “favor or disfavor an incumbent,” he explained.

Committee members also have the option of dropping that criteria altogether if they don’t believe it belongs, he said.

Nieuwsma said it should probably remain.

Incumbency and the racial balance of power

“I think that incumbency is going to be on our minds and in the spirit of transparency should therefore appear on the list, because it would be disingenuous to pretend we weren’t thinking” of it, he said.

Council member Bobby Burns, 5th, asked about how to address the prohibition against creating race-based areas against another principal that talks about non-discrimination.

Cummings referred back to the 14th Amendment and Voting Rights Act.

“It’s very generally stated, but to your point,” he said to Burns, “although race should not be a consideration, one of the things that the committee has to be careful of is actually shifting the racial balance of power.”

Currently, the city has three wards where minorities are the majority group (the 2nd, 5th, and 8th).

“At the end of the drawing, they should not be so significantly diluted,” Cummings said, “as to have eliminated that majority minority significantly.”

The committee is expected to hear more on those issues at the town meetings and beyond. Community members are welcome to attend and provide public comment at Redistricting Committee meetings planned for the fourth Tuesday of each month.

More information about the committee’s schedule can be found in the Meetings, Agendas section of the city’s webpage, cityofevanston.org.

The committee’s timeline calls for the release of proposed map(s) in January, 2023. The group is aiming for Council approval of a map in May 2023