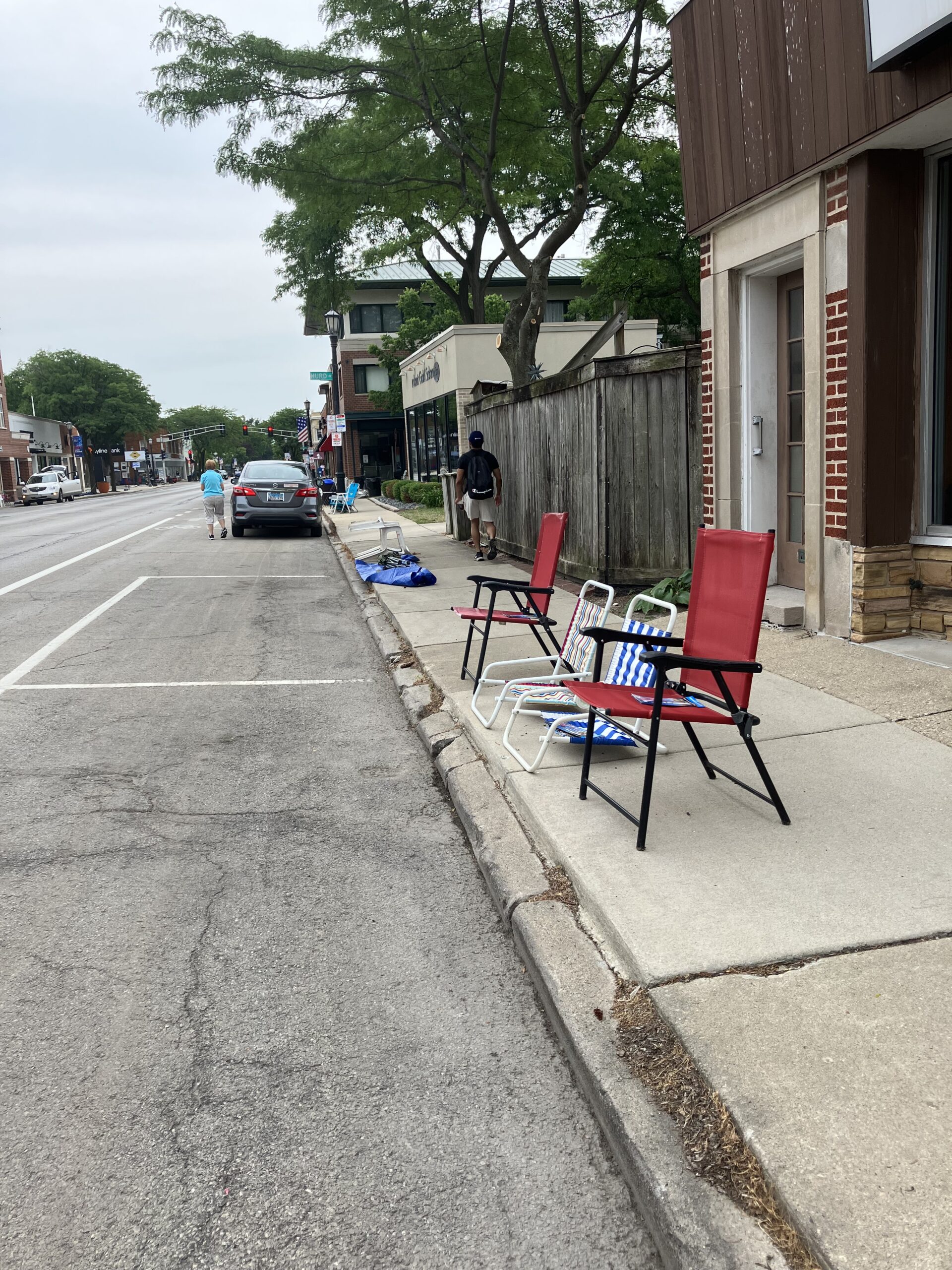 Three hours before the city’s first parade in three years, some volunteers for the event had already begun to arrive.

One group, the Mid-USA Falun Dafa Association, a Buddhist group that promotes wellness and peace,  had already assembled their 60-foot float near the city’s Bent Park, located just off the parade route.

Group members sent a mini-van, though, to the Evanston Fourth of July Association’s information booth a few blocks farther east at Lawndale, after police had informed them that the parade had been cancelled, said Hillary Bean, the Association’s parade director.

The Mid-USA members wanted to confirm whether what they had been told by  police was true or not, Bean said.

She relayed, she said, in a kind of unbelieving way that what they had heard was indeed correct.

Police had informed Jamie Black, the Association’s Celebration Manager, around 11:10 a.m., that the parade had to be cancelled because of a shooting which had taken  place earlier that morning in Highland Park, and that the shooter was still at large, Bean said.

Lack of information early on

At that early point, the difficulty facing decision makers, including police and the mayor’s and city manager’s office,  was “that we had maximum exposure and little to no intelligence,” he said, and so “out of an abundance of caution we shut down the parade, the fireworks and the beaches,” he said.

“We  had no information whether it was a shooter with an accomplice, a shooter that had the association of a larger group,” he said.

Since then, “I think that they’re (law enforcement officials) are making significant strides in the identification of the offender,” he said, expressing hope a law enforcement driven resolution would come soon.

Unlike the shooting at Hubbard Woods Elementary School which rocked the North Shore in 1988, the shootings in Highland  Park didn’t take place in a confined space, he noted.

In this case, “the number of fatalities and besmirchment of a national holiday,” played into the reaction, Eddington said.

“You’re always concerned, are there unknown co-conspirators,” and consider other questions factoring into making a decision what to do.”

“Shocked, dismay, obvious sadness for what  was happening to people in Highland Park,” said Bean, describing her reaction to the cancellation. “It’s  been so long since we’ve done this and we had all worked so hard to get this together.”

The group had just begun taking the advance steps that has won the parade recognition as one of the best on the North Shore.

“The volunteers were just literally being sent out to chalk the streets which we do before the entrants arrive so they know where  to line up,” Bean said.

The Association de charros de la mesa, a horse group from the far  northwest suburbs, was another group which arrived early.

The group parked three horse trailers across from  the Association’s info booth on Central, said Bean.

Jonathan Nachsin served as the Association’s coordinator of volunteers.

Like Bean, he described his reaction as one of “serious disappointment, anger.”

“I was looking forward to seeing people I haven’t seen for a year or more, since this parade didn’t happen in the last two years (due to Covid),” he said.

“I have an adult nephew who lives in New Jersey. I invited him to be a marshal to come out for this parade. He spent summers with us when he was in high school and he even marshaled one year with me. And since he’s an experienced marshal I told him we could use him this year.”

Association members spend much of the year, planning details for the day’s festivities which start at 9 a.m., with morning  games and end 10 at night with fireworks.

In advance, the group printed 6,000, 32-page programs so people can follow the day’s events.

“And I don’t know what we’re going to do with them,” she said.

She said the group is due to meet in two week for its annual meeting and thank you luncheon for volunteer and supporters.

At the meeting, the trustees will review follow up steps from the cancelled  events, including whether “will be able to reschedule our fireworks show..”