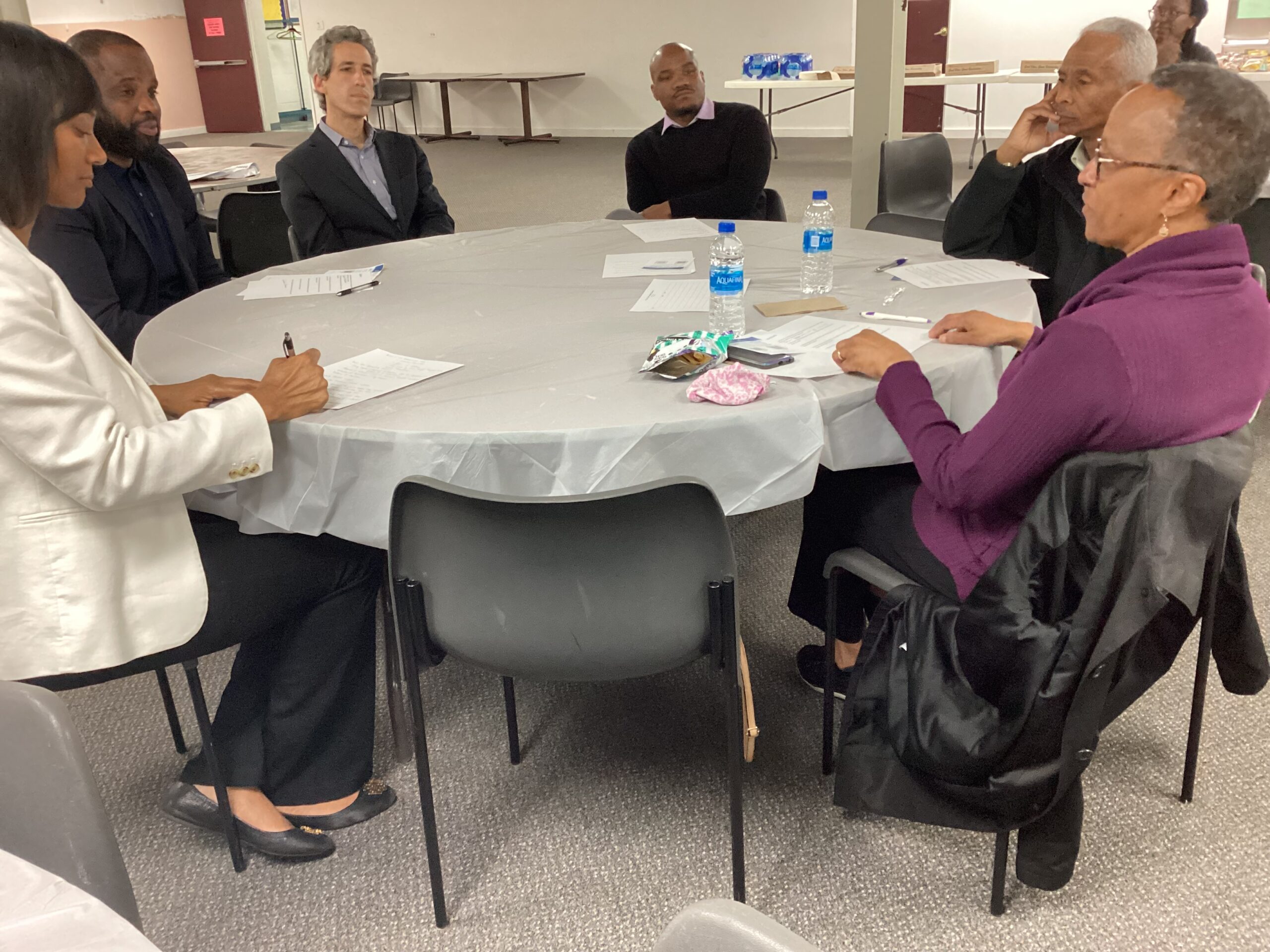 The Rev. Monté L. G. Dillard, pastor at the First Church of God Christian Life Center Evanston, offered to respond to the first question posed at a community listening session at the west side church seeking input of residents about the kinds of characteristics they would most like to see in the City’s next police chief.

“I’d love to see someone who has a deep conviction about the appropriate way that policing should be done,” Dillard said. Someone “open, certainly prone to listen and take counsel, but also somebody who has a deep sense of how to get the job done within themselves.”

Without personal convictions, he said, you can kind of get tossed “to and fro.”

The pastor was one of a handful of residents participating in the discussion.

City officials had held their first session May 18 at the Robert Crown Community Center, also drawing a small turnout. They had scheduled follow-up sessions at First Church of God at 1524 Simpson St., and Saint Nicholas Church at 803 Ridge Ave., hoping to receive the the perspective of the Black and Latino communities who use those worship centers.

Kara Wright, the managing director of Envisioning Equity, the firm facilitating the meetings, led the session at the First Church of God Christian Life Center, walking participants through a set of questions designed to receive responses officials hope to use in drawing up a profile of the ideal police chief.

Both Burns and Biss emphasized the importance of the community’s role in selecting a police chief. The position has been open since June 2021, when then-Chief Demitrous Cook, who had a home in the 5th Ward, announced his resignation.

In Evanston, Burns said, officials “want to make always make sure that we’re thinking about how to improve systems and to really make sure that all of our public services are serving the community in the way that they demand.”

The City right now, he said, “has had a reckoning around police misconduct, but on the other hand, we’ve had a reckoning about youth violence and that’s something that hasn’t escaped the city. We struggle with it — you’ve probably seen it in the news. And so we’re trying to figure out what level of policing do we need that can help address that issue? Or, are there alternative strategies to address the same issue? And all of that starts with leadership.”

Michael and Trammel Alexander recently moved to Evanston from Georgia.

“We value Black lives,” Michael Alexander said. “And we do agree that (the next chief) needs to be a good listener. And he and his officers know the difference between a Taser and a gun.”

He said another desirable quality is that “he’s willing to train his officers to the point that they are sensitive to Black lives.”

Wright asked what being sensitive to Black lives meant to them.

“They treat us the same,” Michael Alexander responded.

Dillard added that “awareness and creating a culture of awareness and management of one’s bias and approach to situations” is needed.

He spoke of seeing a video from another city of teenagers fighting, and the police officers intervening, “detaining the Black student who actually was defending himself.“

“That was a lack of awareness … something happened in their mind that would associate this person … [with] that bias,” he said.

Trammel Alexander said she’s looking for fairness and expressed hope “that the new police chief would serve and protect everyone in the community, not just protecting one element of the community.”

Dillard said communication can be an important attribute, too, “creating a culture of de-escalation through proper treatment, which is talking to people.

“Many years ago, police officers were called ‘peace officers.’ And Scripture talks about peacekeepers and peacemakers. A peacekeeper walks into a peaceful situation and contributes to the peace that already exists. But a peacemaker can walk into  pretty rambunctious situation and make peace,” helping defuse to the situation.

“That’s the hope … making peace is, I believe, an expectation,” he said. “And sometimes the communication [used] is not making peace.”

Biss thanked the residents for participating.

Officials are in their final stages of a search for a new chief.

He said the choice is one the City can’t afford to get wrong. Officials knew that hearing the community voice was an important element.

”So that was the first principle that we feel very strongly about,” said the Mayor.