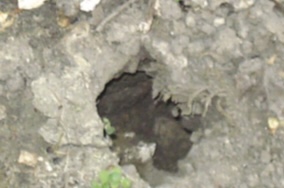 By Bob Seidenberg
Many may associate rats with mid-summer or even deep winter, spotting one hot-trotting across an alley after lunching on food scraps from an overflowing dumpster.
But in fact the fall season is one of the times when rats are most out and about, Greg Olsen, the city’s Public Health Director, told a small group of residents at a Second Ward meeting held Nov. 29 at Evanston Township High School.
To support his case, Olsen, one of city officials giving presentations at the meeting, brought a heat map along with him that indeed showed a sharp spike in rat sightings in parts of the ward during the fall months in recent years.
What about winter? Olsen was asked.
Well, the variety of rats that most often make their home in Evanston and the Chicago area are Norway rats, he pointed out. When temperatures drop, true to their name, they burrow underground. (There’s a reason they’ve been around since the dawn of time.)
This year, the city has taken its rodent control program in a different direction, Olsen told his audience, which included Council member Krissie Harris, moderating the meeting.
Evanston previously contracted with a pest control operator, Olsen said, and once the city received a complaint and report from the contractor, an inspector would be dispatched to the property, placing a bait box there, and doing other upkeep in the area to ensure surrounding properties were compliant with city codes.
City rat control program now in-house
But the city has moved away from that model, with communication sometimes a barrier – “a lag between us and the contractors, regardless of what company it was,” said Olsen, who was named to head the department in January 2020.
“It’s just that we weren’t getting the feedback that we needed in a timely fashion,” he said, “and we weren’t communicating that to the residents. So we were getting complaints and didn’t want that.”
As a result, the city is conducting the program all in-house, he said.
Currently, the city has one full-time inspector and one part-time inspector who is scheduled to be in the field five days a week, Olsen said. Their job includes such things as performing inspections, putting down bait boxes and dispensing information to the community.
Much of that information can be found on the city’s website, cityofevanston.org), by clicking on Health & Human Services and then going to Public Health Services (and looking under Pest Control), said Olsen, pulling up the page at the meeting.
“In many cases, inspectors have indicated that good management of property is essential to controlling the rodent population.”
Some of the actions that residents can take to help the city achieve that goal include eliminating (and recycling) rubbish, boxes, scrap metal and other materials that give rats a place to hide; and controlling shrubs and vegetation overgrowth, especially along foundations, that give rodents the means to move from location to location without being seen.
“Put food away. Don’t put food out for stray animals. And remove bird-feeders. Manage garbage. Use durable, city-approved trash cans with a tight-fitting lid,” the site recommends.
Olsen added that “bird feeders are great. They bring a lot – but are messy and all that feed falls to the ground,” – for rats, a sumptuous Thanksgiving dinner in any season.
A community effort
When outside, “if you’re gardening or doing some yard work,” be on the lookout for rat burrows, a sign of possible infestation, he said. “Even if you you’re not sure we’ll be more than happy to come out.”
Residents are also advised to share their information, to tell their neighbors, tenants and landlords.
“It’s a community effort,” Olsen said at the meeting. “The city can’t do it alone. It takes everybody. You know, you can have one block where everything is pristine and perfect.
“Then, you have a garage door that’s not closed all the way, and rats can get in there and make a home – and the next thing you know they’re spreading out throughout that community.”
Residents who see a rat should call 311, he stressed, adding, “311 is pretty much the social brain of the city because it connects everything.”
After Olsen’s brief presentation, some residences shared their own experiences with unwanted animals, though a number of them concerned squirrels, another kind of rodent.
The Second Ward encompasses the Dempster-Dodge district, which includes a number of fast food restaurants, it was noted.
Olsen told the residents that the department’s health inspectors not only check for food safety violations during a restaurant inspection. They also check make sure the establishment’s pest control reports are up to date, he said, “and do an exterior walk around the property, checking that garbage is properly disposed.”
He admitted, “We can’t have our eyes on it all the time. So if you’re driving by or you’re walking your dog or anything like that and see restaurants, dumpsters overflowing, let us know.”
It might be necessary to increase the frequency of pickup or take other steps, he suggested.
Council member Harris added, “It’s incumbent on us if we’re seeing garbage piled up to take photos, because when I get a request, I’m calling right away or e-mailing [the city], ‘What are we doing about this?’ But usually, by the time we get there it’s clean,” she said, with the restaurant somehow receiving notice.
“Those photos make a difference,” she said.
To learn more about the city’s rat control program, check out the information and short video on the city’s webpage at https://www.cityofevanston.org/government/departments/health-human-services/protect/pest-control