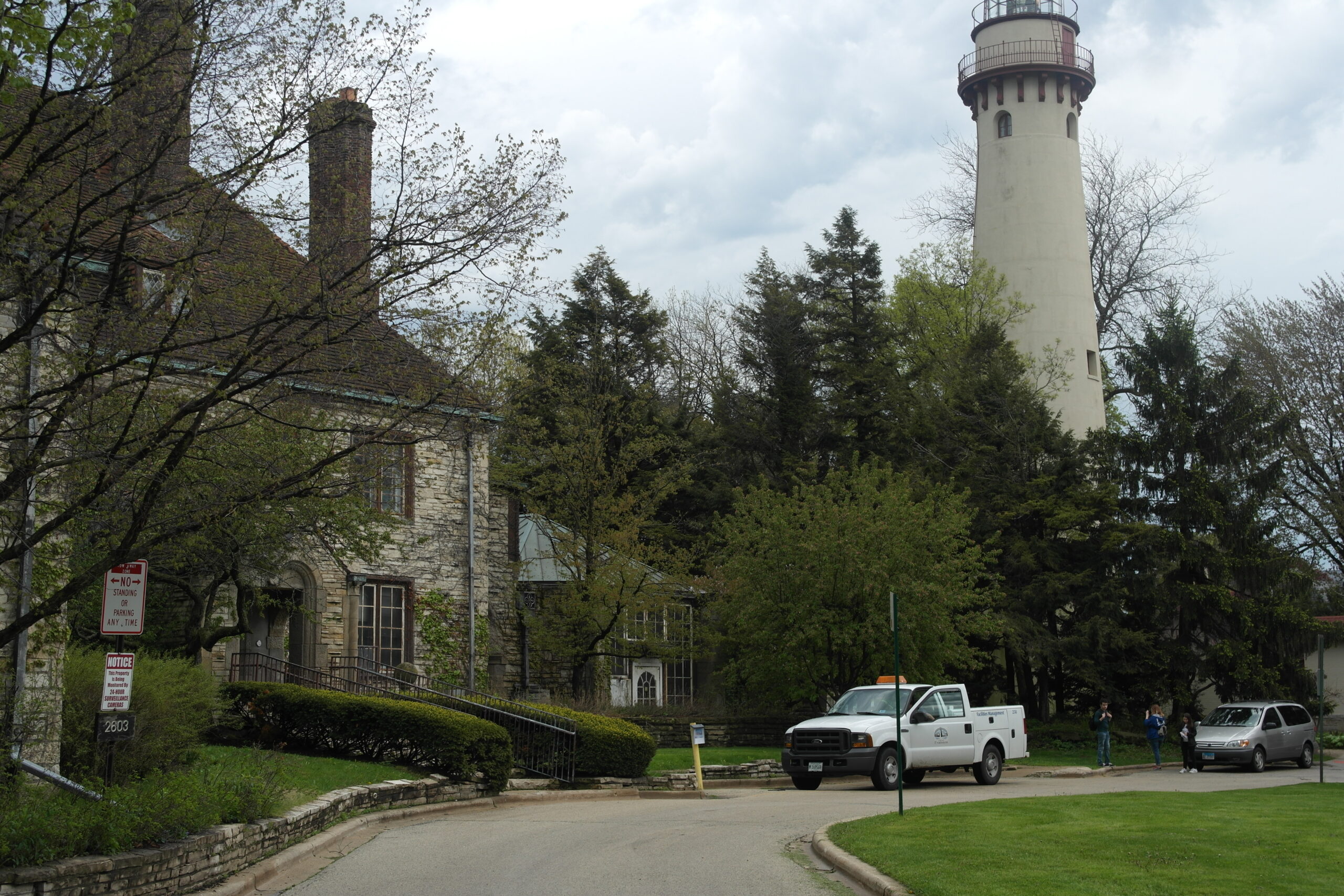 In Crystal Lake, the Dole Mansion, described as a “Civil War era architectural masterpiece”, appeared to be heading for demolition in 2002 when neighbors got wind that a developer wanted to knock down the mansion and annex.

Community members banded together in a major fundraising effort called the “Lakeside Legacy Project,” raising over a million dollars in barely 40 days to save the property, recalled Siobhan Cottone, who would later become the new group’s executive director.

The group discovered its direction for the building after an artist approached them about renting space. “And that’s how it started, with one person saying would you rent me space, so I could create art,” said Ms. Cottone, sharing the story with Evanston community members last month.

“The mansion and property needed a lot of work,” she said. “A lot of volunteers and passionate leaders, like you,” she said to Harley Clarke members, “came together and re-purposed the building to become an art park.” “It took time, it was a challenge,” she continued. “But they all had a vision — they wanted to see programs and events for children and artists in the building and that’s kind of how it started.”

As Evanston officials embark on another Request for Proposal process seeking a user for the city’s Harley Clarke Mansion, it might be helpful to note the effort which groups have put out in some other communities to save their important buildings.

Ms. Cottone said the onetime Dole Mansion is about 80 percent occupied. “We have a plethora of artist that rent space either to operate their businesses out of it or teach or just create their art. We have photographers, we have musicians, we have an orchestra.” To maintain the building, the Foundation draws on “a number of different revenue streams,” including rents, artists sales, and sponsorships, which have “soared in recent years,” Ms. Cottone said.

The group cleared out space to create a performing arts venue space, she said. “Since 2013, we have 300 performances in it and sold out shows. We’ve had everything from jazz music to blues to magicians,” Ms. Cottone said. The property’s biggest money maker is its Lakeside Festival, a four day carnival type event held over the 4th of July holiday, which generates close to $300,000 in revenue annually, she said.

“I love that I’m raising money which goes into our property and showcases art and brings in children and seniors and individuals with disabilities and shares with them this dream and the importance of art,” she told her audiences in the Parasol Room of the Morton Civic Center. “I look at your mansion and that is amazing,” she told her audience.. What a perfect place for arts and events…”

Speaking via video hookup from the mansion in Rock Island, Ms. Kuntzi said “what attracted me to Harley Clarke was what I saw on Facebook — it reminded me what we went through.” The Hauberg estate includes a 1910 mansion, carriage house, and 10-acres of ground designed by Jens Jensen, the same landscape architect who designed the grounds at Harley Clarke.

For a longtime regarded “a jewel,” the property had become rundown in time after being deeded to the city in 1956, said Ms. Kuntzi. In 2016, when preservationists got wind the property was to be sold, they banded together, “and we had a lot of talent just like you guys,” Ms. Kuntzi told Harley Clarke supporters, “and we pretty much bought city hall.” A public-private ownership was negotiated, with Kuntzi’s nonprofit Friends of Hauberg Civic Center Foundation responsible for day-to-day operations.

In the group’s new role, “we spent a year and half just decluttering the carriage house and the house,” Ms. Kuntzi said. As for the house itself, “it wasn’t falling down,” she said, adding: ” I’m sure Harley Clarke is built just as well as the house. It wasn’t falling down but it was just very tired. It needed cleaning,” she said.

At the restored property, “we put on a lot of events,” she said. “We have weddings, we have baby showers. We have just partnered with Quad City Arts,” which brings in “a lot of musicians. We do some free things, but most of the time we have to charge, because we have to become (self) -sustaining and we have to maintain and that’s something you guys are going to have to make sure you do . “We have murder mysteries. Last year at our murder mystery we had to open up for another night and it was a $10,000 fundraiser with probably 300 people, which is actually pretty good,” she said.

“The unique thing about our murder mystery is it is based on the history of the house so we’re still keeping the historical aspect of the house. “Right now the public-private relationship we have with the city is remarkable,” she told her audience. “I would say, if you can, just get them (city officials) on board with you. I know they don’t trust anybody. They didn’t trust us, but they soon learned we were the right people to take care of it (the property). We were no-profit…we have an eleven member board, we also have 20 people on our advisory board…electricians, plumbers, architects. We have a local architect who helped us when we did the carriage house. He drew the plans for all that.

“We are mainly volunteers. I’m the only paid employee and that just happened last January. But we have a phenomenal community and all I can tell you is they’re waiting to be asked. The truly are — there are so many people out there who want to help.”

During a short followup session after, Lisa DiChiera, Director of Advocacy for Landmarks Illinois, asked the two presenters for points Harley Clarke supporters might emphasize in the request for proposals which will seek new users.

Responded Ms. Cottone, “I think there (officials) biggest concern is that they own multiple properties in a city, older properties. And unfortunately when we went to the city with our RFP, two buildings in the city had infrastructure issues –their boiler room, their roof leaked. To be honest if I were to go back to the city I need to prove to them that we have infrastructure — as far as our boiler. We have a 100-year old boiler. That thing going to cost us probably $200,000. We’re going to have to replace that before going to the city, ask them to buy it. Because they want to know they’re not going to have to invest that money right up front.”

Ms. Kuntzi approached the question from a different angle. “You have to have a plan,” she said. “I know that is part of the reason you are doing this tonight, trying to figure out what use you can get out of it — you know, ‘we should be a museum house.’ “No, a museum house is not going to make money,” continued Ms. Kuntzi. “You guys have to keep in mind that obviously they (city officials) don’t want that house, but the community does. But you’re going to have to come up with a very good, really good plan of what going to be using it for and how you’re going to generate money for it.” .