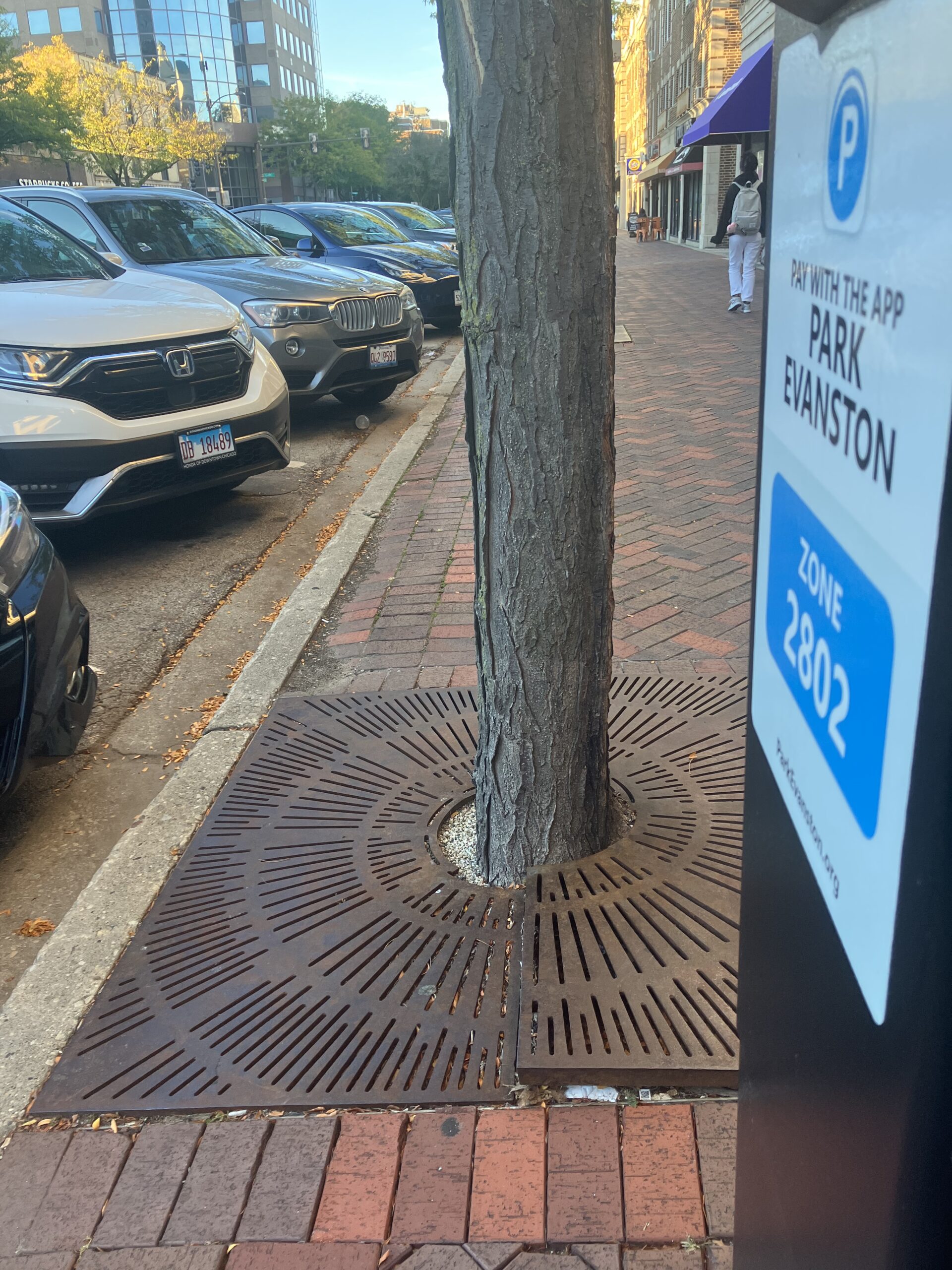 By Bob Seidenberg
A new study of Evanston’s parking system recommends that officials consider raising their $2 per hour off-street parking rate downtown and hike rates in other areas of the system too, generating revenue to bolster aging infrastructure.

The study also addressed parking around Northwestern University’s Ryan Field during special events and football games , maintaining that the city doesn’t have a problem on game days, a view already being challenged.

Council members approved the study at their Sept. 27 meeting but didn’t take any action on its recommendations, placing it on file until another report they commissioned is ready.
That study, under the title of “Evanston Thrives,” is expected to be ready early next year, the consultants conducting extensive surveying of business district users to develop strategies the city can take to reactivate its business areas.
The city engaged WGI Parking Solutions earlier this year to conduct the study on various aspects of the city’s parking system.
The study was set to begin in 2020 but was pushed back to this year because of Covid-19 issues.
The firm was given a broad subject – parking, that has stirred up strong differences of opinion over the city’s approach over the years.

One strong one was that the city’s overzealous parking enforcement was driving visitors to Wilmette and other places where those practices weren’t in place.
In a summary of the study’s findings, WGI authors noted “the pride city staff takes in the fact that it’s facilities have no deferred maintenance.
“To maintain this practice and address problems as the City’s infrastructure ages,” they said in the study, “rates must increase to follow market trends.
What forward-thinking communities are doing

“Chicago should ultimately be used as the metric by which the adequacy of the City’s parking policies is measured,” the study’s authors asserted, “but other comparable cities such as those included in the study’s peer review—that is, Portsmouth, New Hampshire, Boulder, Colorado, Pasadena, California, Madison, Wisconsin, Cincinnati, Ohio, Minneapolis, Minnesota, and Columbus, Ohio—provide valuable data to support these findings.”
Size, climate, extent of City parking management (outsourced or in-house), and even the existence of Transit Oriented Development parking policies were factors taken into consideration.
“While none of the cities chosen are perfectly comparable to Evanston in all respects, they all are similar in one or more area. “Ultimately, the goal of this peer city review was to provide Evanston with a comprehensive picture of what other progressive, forward-thinking cities cities are doing so that they could pick and choose what was relevant and helpful to their operation.”
The firm’s findings grew out of the results of the firm’s peer review, assessment of policies to encourage transit oriented development – a long priority of the city as one of only towns in Cook County with both Rapid Transit and Metra lines — and evaluation of the city’s parking assets when dealing with Northwestern special events.
WGI’s Ashley Orr and Benjamin Sands reviewed some of the firm’s findings at the Sept. 27 Council meeting. 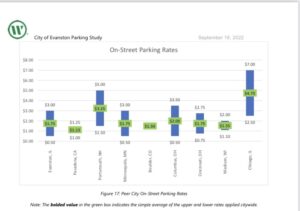 On the peer review side, the study recommended:

“Evanston should consider raising their $2 per hour parking rate for on-street parking downtown to a rate that is comparable to that of their peers.”
Currently, “both the average and the maximum and minimum rates for the city of Evanston fall on the lower end of the spectrum.”
Recommendations
The recommendations, including raising the $2 rate, “would achieve the desired 10 to 20% vacancy ratio per block. We didn’t want to provide a uniform rate strategy for all blocks because all blocks are not the same. Individual blocks that experience higher rates of occupancy and demand should be priced accordingly.”

 “Evanston should move from $0.50 per hour to a flat dollar within the 12-hour parking zones.”
 “Evanston should focus on promoting the ParkEvanston app to increase efficiencies in staffing, maintenance, and financing.”
 “Evanston should consider raising their residential permit rates in higher-demand neighborhoods, akin to the demand-based pricing used in Cincinnati’s Over-the-Rhine neighborhood, and instituting a yearly rate increase like Boulder to ensure that the City is planning for future on-street demand.”
Sands observed that “our recommendation is that the permit fees for Evanston need to be adapted to a demand based model essentially where the areas that experience higher occupancy and higher demand for space.
 “Evanston’s maximum daily garage rate could be increased through a variety of methods, whether through restructuring the schedule from rate bands to a consistent hourly rate of $2 per hour after the first hour (which would yield a much more drastic increase), or by simply raising the hourly rate in the last two rate bands from $0.50 per hour to $0.75 per hour.”
 “Evanston should consider raising its monthly permit rates for covered garage parking to better compare to that of Portsmouth, Minneapolis, Boulder, and Madison. Chicago’s private garages in its downtown, as well as the private garages in downtown Evanston, should also be a metric for determining whether Evanston’s monthly permit rates are matching local market trends.”
 “Evanston should consider a dynamic parking pricing program like Portsmouth’s that raises rates after a certain time threshold on key downtown streets to further encourage turnover of spaces in high-demand areas. Furthermore, like in Cincinnati, Evanston could consider keeping reduced evening and weekend rates in underutilized locations to induce demand.”
 “Evanston should not adopt an on-street employee permit program within residential permit zones without active management and review of the program to understand the effects on the residential community, and without committing to a robust and restrictive permitting process for businesses—both in number of permits issued per business and by proper pricing.”
 “Evanston’s penalties and fines should be evaluated and increased to better reflect the lost revenues from non- payment for parking, the expense to issue the tickets, and the fines used by their peers.”

“I would say that having a suppressed enforcement rate or parking fines scenario does typically encourage that type of cat and mouse behavior between the parking users and the enforcement staff, where they’re essentially like to test the boundaries and controls that the city sets with parking enforcement,” Sands said, “and increasing that fine amount does typically increase compliance with rules.”
On Transit Oriented Development,

“Evanston needs to enforce the TOD parking policies it has instated and take proactive measures in place to ensure
the equitable allocation of these public resources to all types of developments now and in the future. It is
recommended that Evanston perform a parking occupancy and demand study to visualize the rate at which public
parking resources are being depleted and understand the effectiveness of TOD policies and their effect on the public parking supply.”
 On Northwestern Special Events, Orr told Council members, WGI’s findings were based on observations made at two highly- attended events — the Northwestern versus Iowa football game on Nov. 6 of last year, and the Northwestern versus Indiana mens basketball game on Feb. 8 this year.
Among the group’s observations:
 “Evanston sees a high demand for on-street spaces on its neighborhood streets during football games. However, no unsafe or inaccessible on-street conditions, in which emergency vehicles cannot traverse narrow streets due to illegal parking, were observed within the study area.”

 “Evanston does not experience rampant illegal parking on lawns and private property. However, a small group of residents is taking advantage of the opportunity to advertise and sell parking space on their lawns and driveways during football games. Consistent enforcement of City code by police is necessary to curbing this illegal behavior.”
 “Evanston residents can park for free in Municipal Lot #54 with a paid wheel tax. Evanston should consider charging a flat rate for all parkers regardless of residency status to accrue additional revenue and ensure that residents are not taking advantage of the opportunity to relocate their personal vehicles to sell space on their lawns and driveways.”
 “Northwestern’s parking lots (Lot 101 and Lot 102) are only open to season ticket holders during football games. Evanston could explore opportunities for collaboration with Northwestern University to determine whether space may be available within Northwestern lots for some public gameday parking.”
 “Evanston does not have a gameday parking problem. Observations before the basketball game reinforced the fact that issues are more closely tied to traffic congestion and circulation, especially at the ticketed entrances to the Northwestern Lots 101 and 102. Evanston must work with Northwestern University to establish better entry and exit procedures that do not clog Central Street and Isabella Street.”
 “Residential permit District 6, which surrounds the stadium and arena, is an easy candidate for instating more restrictive permit regulations encompassing Northwestern game-days and events.”
Summing up, Orr noted that the recommendations provided in this study are of course not all encompassing and should not be viewed as an ultimate solution to all of the parking problems in the city of Evanston.”
“But the point of the study,” she told Council members, “was to give you a snapshot into what other progressive cities around the country are doing, and provide a general recommendations that can be further honed with additional occupancy data. Ultimately, Evanston’s parking assets are the first and last impressions that visitors have of your city and they must be managed in a way that is efficient, adaptable, equitable and accessible for all of your residents, business owners and visitors.”
Mixed response from Council members
Council members showed mixed reaction in their brief discussion of the study’s findings, following the presentation.
 Council member Devon Reid, 8th, spoke in support of the study’s recommendations to bring increased revenue to the city from parking.

“I think it’s fair to categorize free parking or underpriced parking as a subsidy because we as the city, the taxpayers, have to maintain the infrastructure,” he said, “and if we’re not collecting the proper revenue to maintain that infrastructure that is the almost definition of a subsidy. You are giving it away below value. And so this will help bring us in line.”
He asked whether equity is taken into consideration in connection with permit fees, expressing hope it could be worked into the study’s proposals in the future.
Of the extra revenue the parking changes would generate, “I’m sure this body needs no reminding,” he told Council members, “that we have a $100 million unfunded infrastructure liability, and by appropriately capturing revenue for parking that can be a substantial boost to helping us winnow down that unfunded liability to make sure that we’re providing some of the best infrastructure for residents.”

Council member Jonathan Nieuwsma, 4th, acknowledged the points made by Reid. about the potential Impact the revenue would make.
“I think if or downtown district we’re flooded with customers those arguments would carry a lot of weight with me,” he said.
“We’re not in that condition right now,” he said. “Until we recover from the pandemic, and until our downtown business district is once again thriving and bustling and things are at capacity, I would be very reluctant to raise meter rates downtown.”

Council member Thomas Suffredin, 6th, asked staff how officials planned to “reconcile this (study) with the business district study that’s expected to be completed in January.”
“Are we going to merge these,” he asked, “because very likely that the opinions expressed about parking in that study will be different than these.”
And Council member Eleanor Revelle, whose Seventh Ward includes Ryan Field, echoed the remarks of a resident who resides in the stadium area earlier in the evening, that the basketball games “have a huge impact.”
“The residents come home after work and then can’t find a place to park, so we do have a parking problem on game days around the campus,” she said. She said that involving the business community in discussing the findings from the study will be very important next step.”