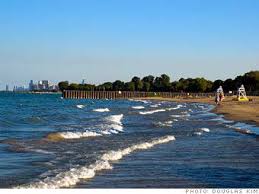 Evanston lakefront officials test lifeguards’ alertness as many as a half dozen times a week with impromptu mock-drowning drills.

But one of those drills came across as a little too real for an out-of-town visitor on July 11. Thinking someone was in fact drowning, she advanced well out into the water before learning it was a drill.

Evanston officials said they would look at ways to step up education to the public that the drills may take place, after the RoundTable shared with them July 14 the woman’s story.

LaFern Cusack, an award-winning producer of Dr. Phil McGraw’s “Phil in the Blanks” podcast, was in town with her husband and their son David, helping her mother-in-law move into new quarters  at The Mather, 425 Davis St.

That afternoon, Cusack, looking to provide her son with a break, walked with him a few blocks to the Clark Street Beach, she said.

Unlike the previous day, when the beach was crowded, she said, there were maybe 20 people this time, mostly young people, many of them playing volleyball.

“My son was like, ‘Mom, it’s like we have the whole beach to ourselves,’” she related in a phone interview July 14.

The two spent some time playing together. “He’s 9 years old,” said Cusack, “but he’s a big 9-year-old, and he was able to carry me and then I carried him, and we were having fun and so we continued to play.

“And then all of a sudden I heard the lifeguard’s whistle,” she said. “And I’m looking at my son, and he’s in front of me in the water about 50 feet from the buoy, and the buoy is in back of me. … The lifeguard jumps off and starts swimming in the water, and I’m like ‘What’s going on?’

“And then all of a sudden I hear splashing behind me and I turned around, and I see this young girl going up and down in the water, and then underneath.” Cusack said she thought. “This girl is drowning!”

Two men to her left were “just staring at her, and they stopped and looked over, and I start running towards her. And I’m, I’m trying to calm her down, because it was like, it was as if she was frantic…I mean it looked like she was drowning. And I was so scared, because I knew I’m not a strong swimmer.”

Mind and body racing, Cusack said she yelled to the woman, “It’s okay, you’re going to be okay. And, and I’m like, if I grab her, I know for a fact I’m going to go under, because she’s much taller than my son, and when I’ve tried to help my son out of the water sometimes I go under. “But then I was like, ‘Okay I’m going to push the girl up, and then I’m no longer going to go under the water. The good thing is, the lifeguard is coming, and maybe the lifeguard will grab me, so I don’t, like, die.”

Cusack kept running in the water toward the young woman, aware that she did not know where the sand shelf dropped off to where she would no longer be able to stand.

“I was literally shaking, and she looks up and says, ‘I’m a lifeguard. I’m a lifeguard.’ I’m like, ‘What?’ She goes, ‘I’m a lifeguard,’ and I just automatically turned around, looked for my son behind me, went to my son, and then I started crying because, you know, it was just so scary. And the I looked to my left to another lifeguard [who said], ‘Oh, thanks.’

“And then I turned to the guys [earlier, next to her in the water], and I [asked], “Did you know they were doing drills? And one said, ‘No, I didn’t know what was going on.’

Even back home, she was still agitated, and she woke up in tears in the middle of the night.

“You know, you see all those shows of people going into the water, trying to help someone and they end up dying. I was able process that whole moment – they need to at least notify the people around them that they’re doing drills, because that was not cool.”

The day following the incident, Cusack said she tried to reach someone at the city by going online but could not locate a number or person to contact.

A Google search of Clark Street beach led took to an old story, which led her to contact this reporter.

Contacted July 14, both Audrey Thompson, the city’s Parks and Recreation Director, and Tim Carter, the city’s Lakefront Manager, expressed concern about Cusack’s experience. Thompson asked for an audit of the incident, to make sure lakefront personnel are “doing what they are supposed to do.”

Carter, like Thompson, in his position only since April, confirmed that a mock drowning drill was held somewhere around 3:45 or 3:50 p.m. July 14 at Clark Street Beach.

The lifeguard did pass, he said, recognizing the swimmer in distress in the water within about 15 seconds, and then responding to the emergency within 30 seconds, “which is [within] our protocol.”

Carter said, to his knowledge, this is the first time the city has received a complaint about the practice. The drills are in line with an industry standard, applying to lakefronts, aquatic pools and water parks, he said.

“They perform these what some people call audits or mock drownings, to keep lifeguards essentially on their toes,” he said.

The drills are “how we keep our lifeguards engaged and you know, on top of their skill,” he said. “It’s a test – that’s really what it is, a test. And if the lifeguard fails this test, then we pull them down, and there’s retraining. And if they fail the test again, then they look at disciplinary action, either through a suspension or termination. You know, [regarding] lakefront safety, we take it very seriously.”

Communicating about an active drill

Alerting people ahead of time, he said, could defeat the purpose, “because then our lifeguards would obviously know ahead of time that a potential test is going to be happening.”

Still, in the case of Cusack’s experience, he said, “I recognize how it could be alarming.” In such instances, he said, “We try to make that contact with our guests through a megaphone immediately after the life guard recognizes that something is going on. So. if a lifeguard sees that someone is a distressed swimmer, the lifeguard whistles – the whistle is a communication tool to notify the other lifeguards that there is something going on on the beach.”

The communication then makes its way to the beach manager. “If something really was going on, we would clear the water immediately and secure the scene,” Carter said.

“But in this case, where it’s a mock drowning, we go on the microphone and just reassure people through the microphone. And, you know, if there’s a lot of people on the beach, it might be kind of hard to hear the microphone. We do the best we can.”

LaFern Cusack said she was not aware of any announcement or protocol prior to incident. “We were also there the day before, and there were so many people going beyond the buoy that the lifeguards kept blowing their whistles,” she said.

On July 11, though, “I’m not aware of any announcement. … no whistles, no lifeguard announcement with a megaphone like they had the previous day, nothing. It was a quiet day, with less than 20 people in the lake. Like, my son said, it [was] like we had the lake to ourselves.”

Asked if she wanted to be put in touch with officials, Cusack said her main concern was that others do not go through what she did and are placed in harm’s way.

“I think that they need to inform people in the water that we are conducting a drill,” she said.