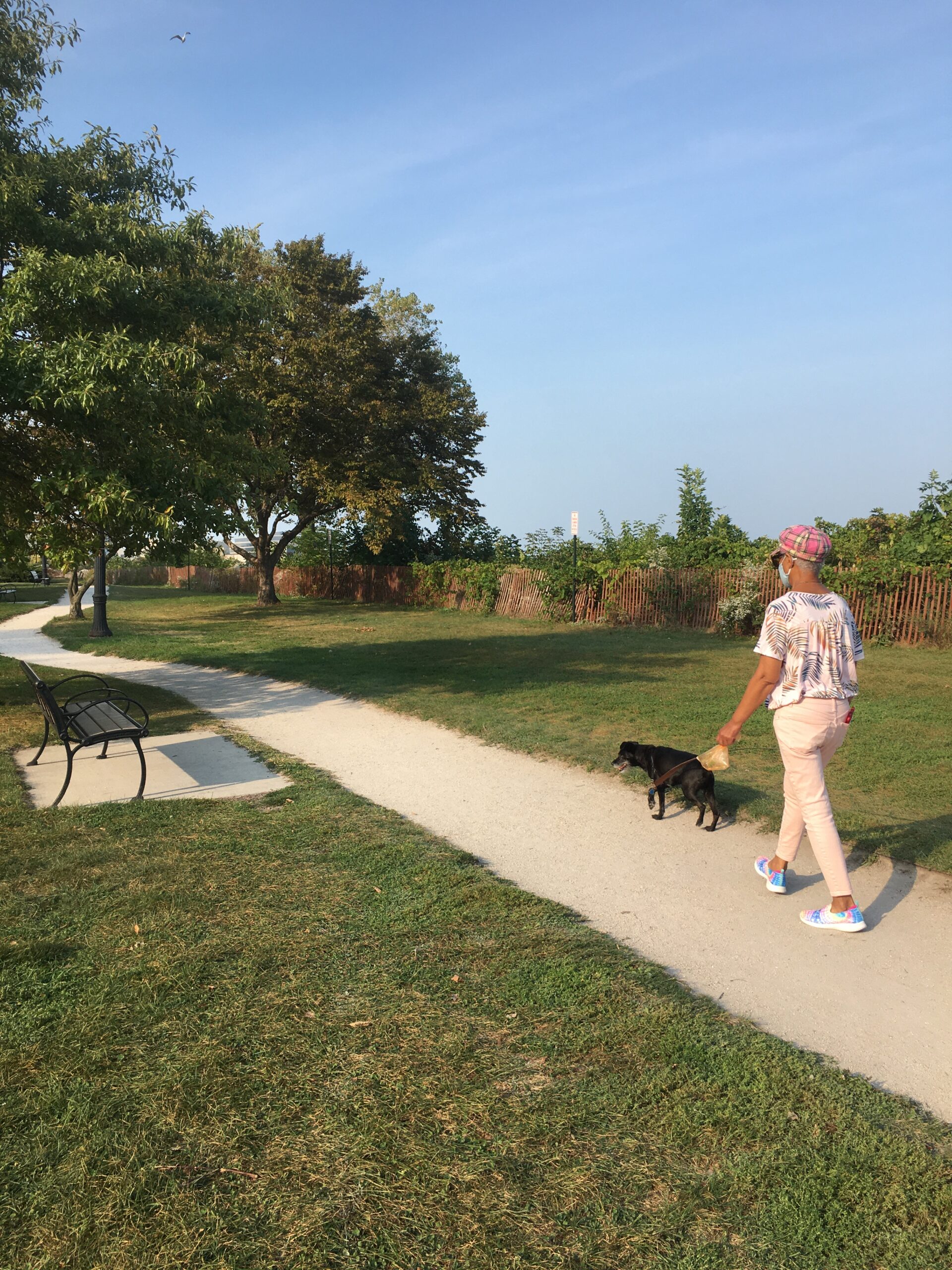 Acknowledging the City was at a crossroads on the issue, Evanston officials turned to Council members at their Sept. 20 meeting for direction on where the City’s second dog park should be located.

The City is down to one dog park, aptly named Pooch Park, on a 2.5 acre tract that runs along the North Shore Channel south of Main Street and north of Oakton Street, in a space shared with the Skokie Park District.

A dog beach operated for years just south of the Clark Street Beach, but high lake levels put it out of commission several years ago.

Officials held three well-attended virtual meetings starting in the spring, discussing options for a second dog park, with $110,000 in capital improvement funds set aside to be used for the project.

In online voting, dog owners and others overwhelmingly supported parks along the City’s lakefront as their choice for a new park.

At the lakefront, Burnham Shores/Elliot Park, Dawes Park, Centennial Park and Clark Square all received “support” or “strongly support” ratings. The fifth site – far from the lake, in northwest Evanston – was Lovelace Park.

At the same time, residents in each of those areas strongly opposed a dog park, raising concerns about noise, odor, parking, pet waste and other matters, said City Engineer Lara Biggs in a presentation on the issue at the Council’s Sept. 20 meeting.

Also, she said, “there was concern that [establishing a dog park in any of those areas] would somehow disrupt the character of the historic nature of the lakefront.”

Biggs also pointed out that officials had received a lot of suggestions about establishing dual-use sites, to be used “partly for dogs part of the day and partly for humans the rest of the day.”

Staff, though, did not find those suggestions viable for legal reasons, she said, which stipulated that dog parks must be fenced off permanently and accessible only to permit holders.

“And so we’re sort of at a crossroads,” she told Council members, “where the staff is really seeking direction about how to proceed.”

She presented the Council several possible next steps:

In Council discussion, Melissa Wynne, 3rd Ward Council member, after disclosing that she grew up as a dog owner and currently owns a dog, suggested the City might consider another option – establishing a dog park at Lincoln Beach at the east end of Lincoln Street.

The City and Northwestern University have been in dispute over ownership of the beach, which was created during the 1960s as part of the University’s expansion on the north end of its lakefill.

The Illinois Department of Natural Resources stepped into the issue two years ago, declaring the beach belonged to the State, and advising the City and the University to enter into a memorandum of understanding acknowledging that fact.

Wynne proposed – “in the spirit of Barbara Janes,” she said – that the City explore the possibility.

Barbara Janes, who died Sept. 3, was a local activist and dog owner who strongly advocated that the City establish Lincoln Beach as the City’s new dog beach.

Responding to the suggestion, Biggs said she would like to get more information from the City’s Law Department.

Still, she said of Wynne’s proposal, “It is a theoretical possibility.”

“I’m not sure it’s one Northwestern would agree to, because they also use Lincoln Beach periodically,” she said.

In addition, “The only ready access to it right now is through Northwestern’s property so there are some logistical barriers that would have to be overcome that aren’t $110,000 worth of cost.”

“Well, I still think that is worth pursuing,” Wynne responded.

“Many people loved the dog beach when it did exist for their dogs.”

As for opposition by residents to other lakefront sites, Wynne referred to Clark Square, off Sheridan Road and Kedzie Street, in the southeast ward, where, she said, opposition was strong.

“And it wasn’t necessarily because they didn’t want to live near a dog park …” she said.

Rather, “It’s because that park is one of the few open spaces along the lakefront that is really, truly passive. And I had one of the neighbors send me a list of all the ways that Clark Square Park, especially since the pandemic, is now used.

“There is a girls lacrosse [team] that uses that open space, because it’s hard to find large open space in the Third Ward. There are people who come and enjoy it because it isn’t a picnic area, so you can actually have some quiet. I was astounded at the number of different ways that people use the park.”

Twiggs Park at Dodge and Simpson Street is one of the sites that has received mention as the location for the City’s next dog park. (RoundTable photo)

Council member Cicely Fleming, whose 9th Ward is west of Clark Square, said she disagreed with Wynne about the location and believed Clark Square would make a “great, viable dog beach.”

“That is not my area of expertise, but it seems like the park could be gated off, as you described for a dog park,” she said to staff, “and still have some great space for people.”

As things stand now, however, she said she could support Twiggs Park as a location. Twiggs runs along the Metropolitan Water Reclamation District land, at Dodge Avenue and Simpson Street.

Fleming said the parking there is “probably not enough for all the people who have dogs who want to use it, but it does at least have some parking.”

“And I think, again, it can be used for many things, particularly for dogs,” she said. “In a gated space there’s still going to be plenty of space for people to do other activities.”

“I understand the neighbors might not love it, for a lot of reasons,” she said, “but then again, this is a town of 75,000 people, and people don’t love a lot of things and we have to make hard choices.”

“I know many people go [there]. … For many reasons people prefer the beach, because, obviously, there’s the water there,” Kelly said.

She said without homes pressing up against that beach, “you won’t get the same pushback on a lakefront space. I know many, many people go to Wilmette to use the dog beach there and now they let everybody out – it’s right next to their swimming beach,” she said.

If a dog park were located at Lincoln Beach, she said, “I think that [site] could be accessed right at the end of Lincoln Street. It seems like it wouldn’t have to be too complicated, creating an entrance.”

Council members took no vote on the issue, which had been set for discussion only. City staff will explore the suggestion of Lincoln Beach as a possibility.