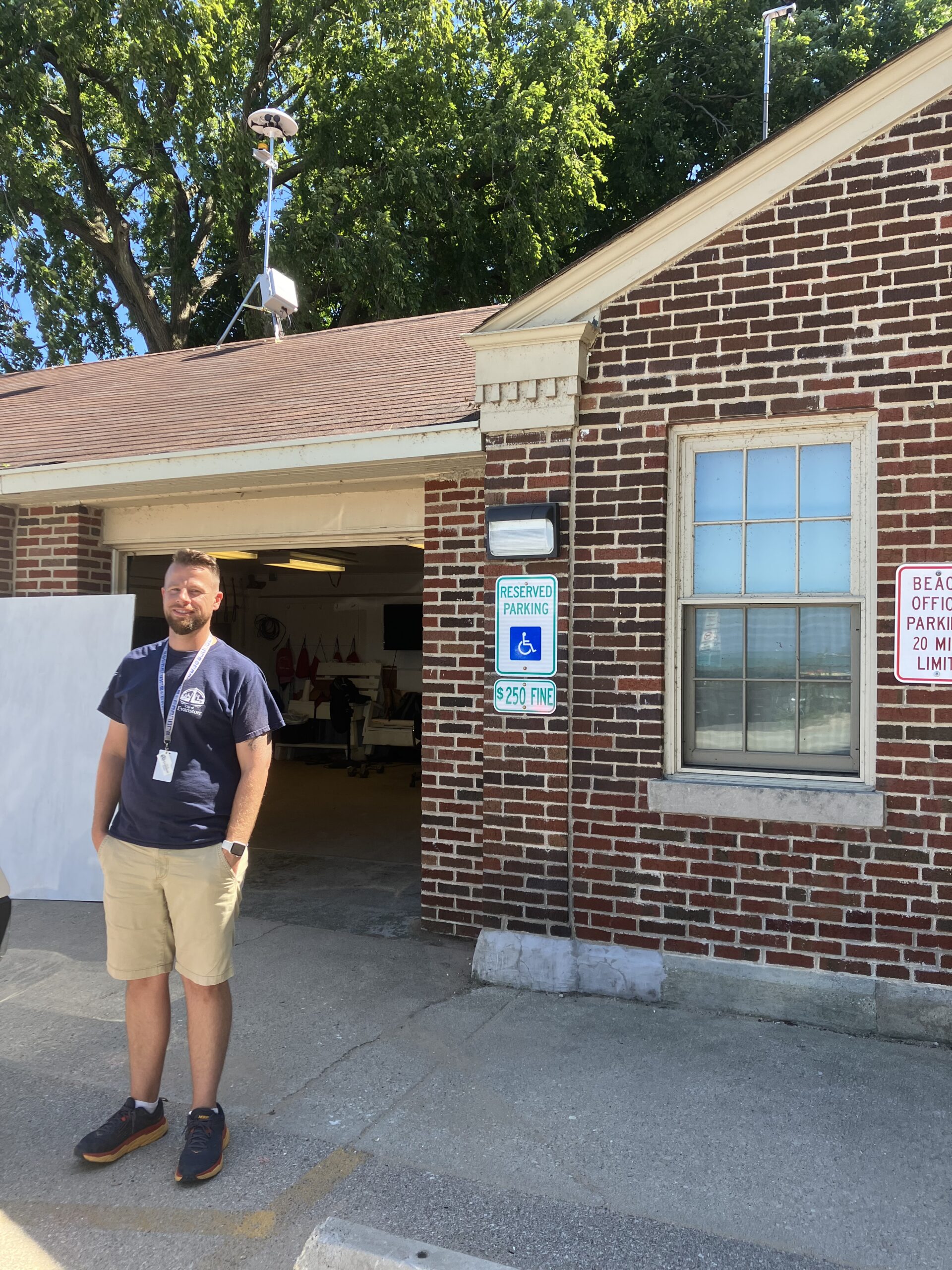 By Bob Seidenberg
Lightning strikes are not infrequent along Evanston’s lakefront.
Something about the confluence of sail boats with metal poles and masts on them, flag poles on shore, swimmers standing in water, seems to be conducive for attracting them, said Tim Carter, the city’s Lakefront Director.
He estimated staff members have to clear beaches roughly ten times a summer in anticipation of a storm landing.
“So far I think we’re at six or seven,” he said, asked for a count during an interview on Thursday, Aug. 25.
That’s all the more reason why Carter was eager to talk about the upgrade of the lightning protection system the city has been using to alert swimmers and other lakefront users should a storm be heading their way.
The city has been using a lightning protection system along the lakefront since 2007 when a Thor Guard system was installed on the roof of the Dempster Street Beach office.
A computerized system, the Thor Guard can predict the probability of a lighting strike within eight to 20 minutes before it occurs, Carter said, and is regarded as 97% accurate.
The original system, “obviously with the time and harsh weather elements down there – the sand in particular getting into the sensors – it kind of was giving us a false reading occasionally,” he explained. “So it was definitely time to invest in a new system down there.”
So the city, for the bargain price of $6,000, upgraded to a new model, where the new sensor is 100% enclosed from the effects of water, sand etc., Carter said.
“But this time we had a horn strobe on the exterior of the beach house,” he said.
Now, when there is potential for a lightning strike in the area, a strobe light will turn on and a warning horn will sound with an uninterrupted 15-second blast, Carter said. The flashing light continues until it’s all clear.
“Previously, before the upgrade, it would just be a little blinking light inside the lifeguard room, and then our lifeguards would radio all the beaches,” Carter pointed out.
He further noted that, although city beaches are only staffed Memorial Day through Labor Day, “this system is active through November.”
Therefore, “Whether you’re taking a jog in the park or just enjoying a late September day on the beach, if you hear that siren, then you know it’s not safe; it’s time to come off,” he said. “And then, if there’s an all-clear as well, it’ll do three-, four- or five-second blasts to be heard up to 600 yards from the beach offices.”
The horns are pointed toward the beaches, parallel to the lake, so not to disrupt homeowners greatly, he said.
They are also positioned so vessels off shore, “which is our paddle boarders, our kayakers, sail boat captains, can hear that horn,” Carter said. “So it’s just another technology we are using to keep our resident safe on the lake.”