By Bob Seidenberg
Kristian “Krissie” Harris’s long resume of community involvement will now add “Alderperson” to her accomplishments, with Evanston City Council members voting Monday, Sept. 12, to appoint her to fill the 2nd Ward Council seat until a special election next year.
Receiving applause from her supporters, Evanston City Council members voted 8-0 to approve Harris to fill the 2nd Ward Council seat, left vacant after longtime Alderperson Peter Braithwaite announced he would be stepping down in July.

Mayor Daniel Biss announced Sept. 9 his appointment of Harris, subject to approval from the City Council.
His announcement came less than three days after Harris and six other candidates for the 2nd Ward seat participated in a community forum, presenting their credentials to be named for the position.
Harris is a 49-year resident of Evanston, and a 23-year resident of the 2nd Ward, the city said in its announcement of her appointment.
Her strong record of community service, included serving as a trustee of Second Baptist Church, volunteering as C&W’s Foundation weekly food giveaway program and as an active member of Zeta Ph Beta Sorority, Biss saidin his announcement.
She has also served on the boards of YWCA Evanston/North Shore, the Dajae Coleman Foundation, Family Focus Board, and others, the announcement said.
Biss said, reading the list of organizations Harris listed initially in her application, he thought maybe it was a error.
“How can one person have done so many things, the number of organizations you were giving time to?” he said to Harris, following her appointment. “Really, really inspiring,” he said of her work, noting the “big, strong impressive field,” she was up against.
Harris, in her remarks at the Sept. 12 meeting, thanked the support she drew from the community. ”I appreciate the commmunity in which I live and serve,” she said. “They (community members) have poured so much into me that it makes this easy and effortlessly to be up here to continue to serve.” 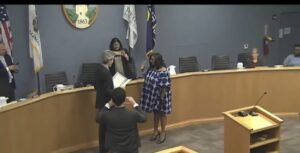 She won’t have long, though, in the position, before she will face an election to continue in the seat.
Harris, as well as another Council member, Juan Geracaris, in the 9th Ward, will face a special elections as early as February to determine who will fill out the remainder of the remainder of their term which carries through 2025.