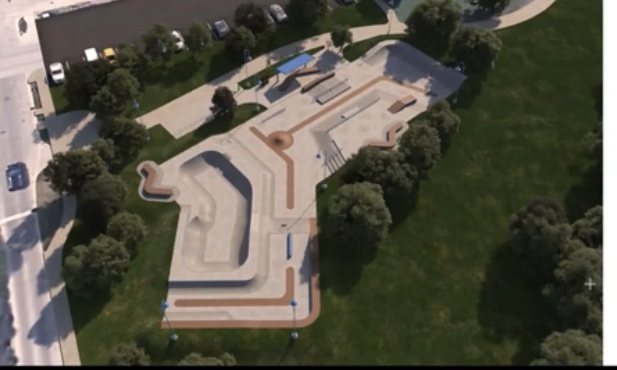 By Bob Seidenberg
Starting from scratch nearly a year ago, a city team is now moving closer to a final design for a state-of-the-art skate park at Twiggs Park, which lies along the North Shore Channel between Green Bay Road and Bridge Street.

At a public meeting held via Zoom April 5, officials presented two skate park concepts based on comments they had received at their previous Feb. 22 meeting on the issue.

“With only 10,000 square feet, we can’t include every single feature, but I think we did a pretty darn good job of incorporating the highest-requested features,” said Jodi Mariano, a principal with Evanston-based Teska Associates, the city’s consultant on the project, introducing the discussion.

Officials will now take the comments heard at the April 5 meeting and refine them into a final concept design to be presented at a fifth public meeting, on May 17, she said.

There has been no dedicated skate park in Evanston since a temporary one opened on the east end of the Robert Crown Community Center in the late 1990s. It closed a few years later.

Based on the budget and available space, designers are targeting an area on the east end of the park, at the southwest corner of Green Bay Road and Ashland Avenue, said Mariano and Vince Onel, head of design with Stone Ranch Skateboard Designers and a consultant on the project.

A “beginner-friendly zone,” was one of the features that received consensus support during the process, Onel said.

“It doesn’t have to be fully separated, just an area within the skate park that is a little bit more beginner-friendly,” he said.

Onel said the separation into zones should “be really nice for those Saturday afternoon sessions where the park is super-crowded, and you kind of want to organize the chaos a little bit.

“But at the same time, for that Tuesday morning session where just you and a buddy have the park to yourselves, you’re going to love how flowing this park is. You can flow from one zone to the other, and there are no dead ends.”

Zone 3 is an enclosed bowl, that “transitions from a four-foot section to a six-foot section,” he said. The mini-half pipe is located just north of it.

“It’s two feet tall and it’s really nice for beginner riders,” Onel said. “If you like both skating and transition skating but you’re not quite ready for the bowl, this is going to be a great area for you to learn and practice, for feeling comfortable for the bowl.”

Closed bowl versus open?
At the meeting, participants were given a chance to help the team make decisions on some of still undecided features in the concepts by voting online.

“It’s really unique,” Mariano said of that feature. “We spent some time looking at other skate parks, and I have not seen one that does that.”

For identity features for the skate park, voters were deadlocked between a “flow” theme and that of designs using twigs, reflecting the name of the park.

Mariano said team members’ next step is to take what they heard at the meeting and refine it to one final concept.

“And then after that, we’ll be coming back to you all and presenting to the public again, [at the May 17 meeting],” she said.

The city timetable calls for construction documents to be prepared between May and September of this year and for bids to go out later this year or early next year. The construction period would run sometime between March and November of 2023, with the skate park projected to open in fall of 2024.

More information about the project can be found under “Skate Park” on the city website, city of Evanston.org.