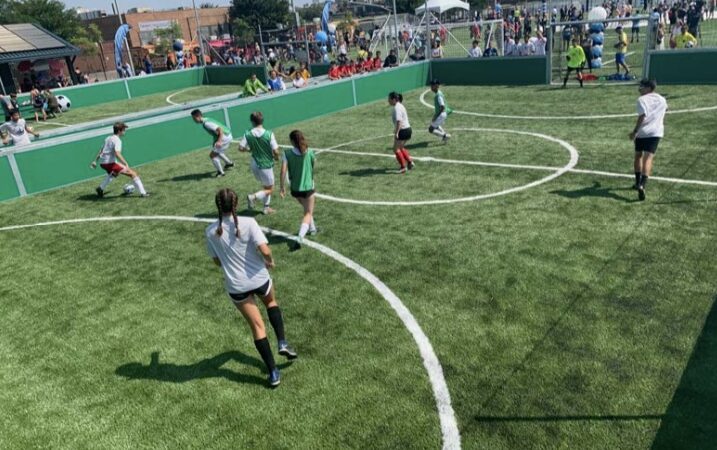 By Bob Seidenberg
Two city-owned properties at 1805 Church St. and 1708-10 Darrow Ave. lie within the West Evanston tax-increment financing district and are slated to be redeveloped several years down the road.

Instead of sitting unused until then, though, one city council member is proposing that officials consider placing two street-soccer pitches – compact-sized soccer fields – on the lots, creating a healthy outlet for neighborhood kids and perhaps nurturing an interest in the sport.

Speaking at the Evanston City Council’s Administration and Public Works Committee meeting April 11, 5th Ward Council Member Bobby Burns said, “I think this will benefit all age groups and ethnicities here in the city, and I think it’s an excellent temporary option for a site that isn’t utilized at all right now.”

The two properties are currently being planned for redevelopment since the city accepted the proposal of Mount Pisgah Ministry and Housing Opportunity Development Corporation, city staff members wrote in a memo.

“The development team has indicated site preparation for a future development will not start before spring of 2024,” they noted. “The project has just entered the zoning analysis phase.”

Burns said the idea of soccer pitches on the lots came to him a few months ago as he and others toured the city, scouting for locations.

Council Member Clare Kelly, 1st Ward, “nudged me and said, ‘Hey, I think Church and Darrow might be a good location.’”

The property has sat vacant for some time, he said.

“It’s been a goal of mine to revitalize and activate underutilized spaces and spaces that aren’t utilized at all,” Burns said. “And so this is a way to improve the site, to repave it in some ways.”

He acknowledged that Evanston currently has some good soccer programming.

“But, as somebody that played soccer growing up, you still benefit from having a location closer to where you live, where you can get some additional touches,” improving your play, he said, “and I think having this right at Church and Darrow goes nicely with the skate park that we’re looking at [in nearby Twiggs Park, also in the 5th Ward]; and there’s a canoe launch also proposed close to the 5th Ward.”

Kelly, a longtime Spanish teacher at Evanston Township High School, which is located near the empty lots, added, “Every day when I leave school and drive by that corner, I just get really excited about the possibility – the prospect of seeing that area activated in such a healthy, happy way.”

She said she would love to see more places around town that are “accessible, un-programmed places to be healthy and active,” especially coming out of COVID.

“It really pulls a community together,” she said, “so I hope this goes through.”

Pitches have been ‘community builders’ in other places

A company has approached the city about installing the soccer pitches. Neal Levin, an Evanston resident and co-founder of Mettle Sports, addressed APW Committee members at their April 11 meeting.

He said the company has placed soccer pitches in various locations in Evanston since 2016.

“All of them have been temporary, but temporary can be as long as two to three years,” he explained.

He said that one of the pitches, located outside the Robert Crown Community Center at 1801 Main St., “was one of the most used amenities in the city, outside of the beach.

“The thing that we’ve learned with these, and that Evanston has proven out as a testing ground for us, is that these pitches really do a great job of building communities,” Levin said.

“They provide a safe haven for kids to go. The residents treat them as a sacred space. We have not seen to date any graffiti or marks or vandalism of the street soccer pitches. Boys, girls, different ages, ethnicities – it really is a melting pot, I think, particularly because of the shared love of soccer, ‘the beautiful game,’ and partially because of the way it’s played with walls and goals built in.

“The game doesn’t stop as much as if we’re playing on a large field,’’ he said, “[where] you can just run away from someone who’s slower than you. You’re not running away from anyone here; you’re not kicking the ball harder than anyone else here; and the ball changes possession so many times that no one gets upset to lose possession. And so, what we saw at the Robert Crown pitch was kids self-organizing, playing on their own, making up their own rules.

“They play two-on-two all the way up to 10-on-10 inside one of these tiny little pitches. And our proposal is to put two of these pitches in the space and let kids self- organizes.”

He said the company has placed pitches all over, including two permanent pitches in Chicago, and other pitches in Boston, San Francisco, Orlando, and other cities.

He said kids using one of the company’s pitches, built next to Shields Elementary School in Chicago, called it an oasis.

Installing a basic pitch would cost around $150,000, the company said in its proposal. The work would include removing approximately 10,185 square feet of existing concrete slab at the site.

The lot would have to be leveled to accommodate a new gravel surface and screenings put in place to protect surrounding plantings and trees. Grading and resurfacing would add additional costs.

In a memo to the committee, Paul Zalmezak, the city’s economic development manager, estimated the total cost of the project would range from $250,000 to $470,000, depending on the nature of the pitches.

Burns had suggested the possibility of the city’s tapping funds from the West Evanston tax increment financing district to help pay for project costs. In the memo to the committee, Zalmezak said that site preparation costs could likely be offset with funds from that TIF district.

He indicated, though, that other project costs, such as the acquisition of the pitches, might not fall under TIF regulations, “so we have to figure out what the budget is” for the total project, he told committee members.

In a TIF district, taxes are frozen at a certain level for a specific period of time. Anything above that amount, the “increment,” is then set aside in a fund that can be used or borrowed against for approved upgrades and projects.

To a question from Burns as to whether the TIF funds could be used to cover lighting, particularly if the pitches were to be moved to another site within the TIF at some point, Zalmezak indicated that might not be supported under TIF rules.

Used in that manner, it might push TIF to a point where “I’m not sure we’re going to win in a court battle,” he told committee members.

Council members directed Zalmezak to examine the TIF issue closer and report back.

“I think the question is how much of this can be funded through TIF, and if not, then we have to look further,” Burns said.

“I think what we’ve heard,” he said, referring to Levin’s report, “is community members of all ages actually utilize the soccer pitches because it’s a quicker pace. It’s almost similar to a much smaller basketball court with a trampoline – it’s a much more intense experience.’’