Home City News At their final Evanston City Council meeting, Braithwaite and Gandurski honored for their service to the City 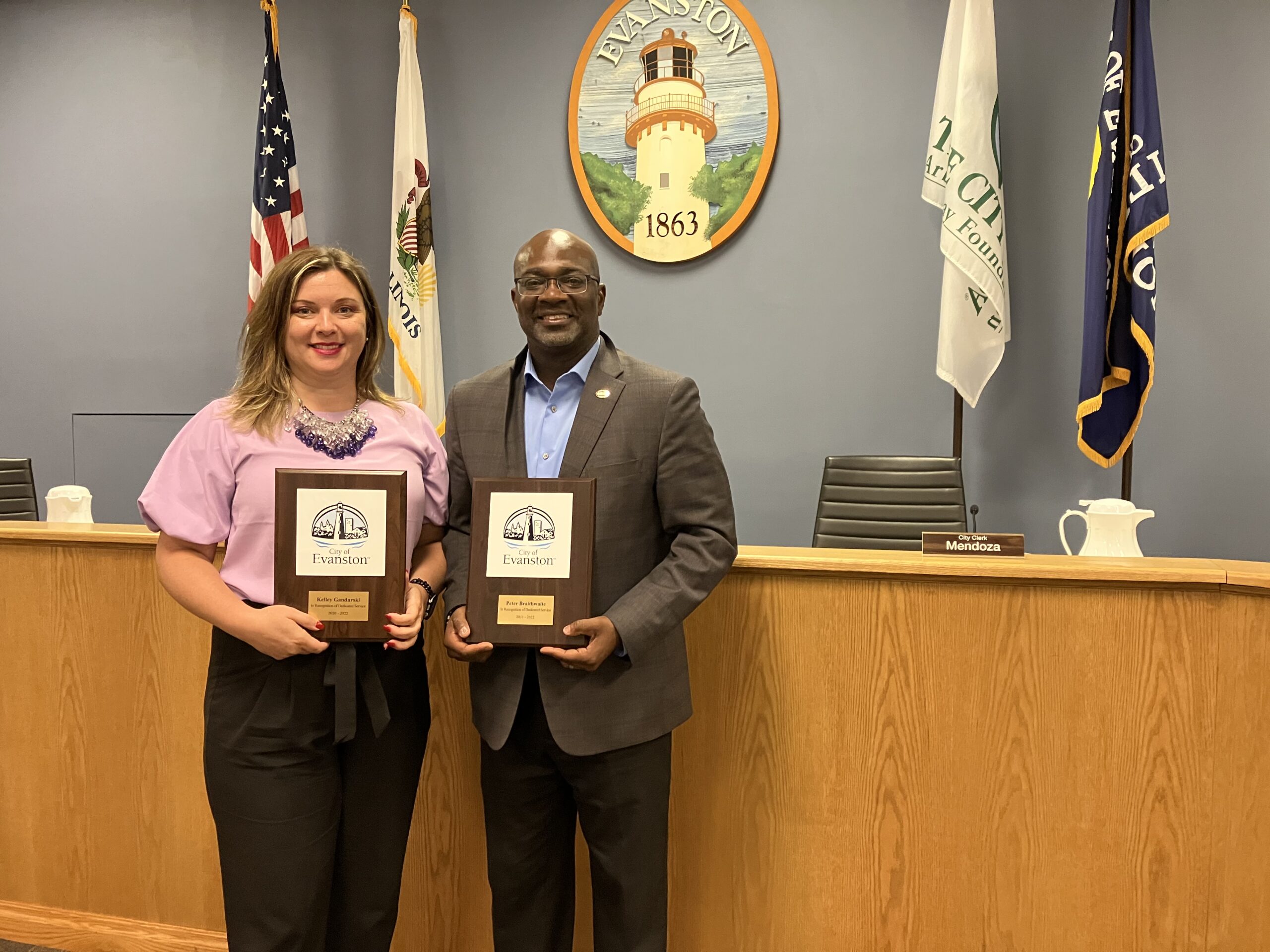 Evanston City Council members paid tribute to retiring Second Ward Alderperson Peter Braithwaite, as well as to interim City Manager Kelley Gandurski, who was pressed into the city’s top role during a tumultuous period, in an series of farewells at their July 11th meeting.

Braithwaite announced at the June 27 meeting he planned to leave his Second Ward seat, which he has held since 2011, citing some recent life-changing experiences he and his family have gone through, which included the loss of his mother.

He recently began a new job as Director of Procurement, Diversity and Community Engagement at Northwestern University.

Mayor Daniel Biss spoke of the experience he and other members of a relatively new Council would miss.

“I’m new myself to municipal government and experience is really precious,” he said. “Your experience – in particular, your institutional knowledge, your memory of how so many things have worked over the years, it’s been really important, I suspect, for all of us, but I know for me personally.

“And for me personally, the time that you’ve been willing to go walking me through things and share your view on things and educate me it’s been enormously valuable. I really, really appreciate it.”

Council member Melissa Wynne, 3rd Ward, the longest serving member of the Council, and who has been seated next to Braithwaite on the dais, spoke of the many issues they worked together on over the years.

“You led the way on alternatives to arrest. You’ve been on M/W/EBE [Minority-, Women-, and Evanston-Based Enterprise Committee] for the whole time. Reparation [and] all the reasons it happened…so much because of you.”

“And I will so miss your collaboration,” she said. “Our phone calls, our long talks and your wisdom – that is something that I have valued so much throughout all the time.”

Council member Bobby Burns, 5th Ward, in his first term as a Council member, noted of his colleague that “he shows up and shows up in the right way and it’s consistent over and over and over again. Year after year he’s showing up – and how you show up says a lot about how you value the role, and how you value the importance and the responsibility that we have to serve the public.”

Braithwaite, the son of Jamaican immigrants and the youngest of their five children, thanked the Mayor and Council members.

“I’m confident in what you will continue to do, and if there’s any advice that I can share is just [that] we have an amazing staff,” he said. “They’ve worked very hard on behalf of our city.

As for himself, “I’m not going anywhere. I will continue to live in and serve in different capacities in this town, so it’s really not a goodbye but a welcome to doing new things with more focus.”

Council members also thanked Gandurski, the Interim City Manager who recently announced she would be leaving that post to join Elrod Friedman, LLP, a land-use and governmental law firm.

Gandurski began her Evanston career as the Corporation Counsel and was tapped to become interim City Manager in October 2021 after Erika Storlie resigned from the manager’s post.

She was called into service “in the midst of both the pandemic,” and the lakefront sexual misconduct scandal that rocked the city, noted Biss. “We wound up asking Kelley to do way more than she signed up for and she did it cheerfully, she did it with dedication, and she did it well,” he said.

Council member Jonathan Nieuwsma, 4th, was one of a number of Council members who praised how she met the challenge.

“Stepping into the interim role is an incredibly challenging task,” he said. “Knowing that you’re going into a job that’s probably not going to be yours, or may not be yours for a long time, and having to assume command and take over and steer a ship that was in some stormy seas and get us on a course and then stabilize that ship — and Kelly has done this and I’m immensely grateful for the work.”

Braithwaite recommended the city take the step, noting that cities all over the country are recognizing her contributions on the issue, said Mayor Daniel Biss.

“And it’s an enormous point of pride of the city with good reason,” he added, stressing the honor belongs to Simmons.

The resolution noted the many awards Simmons has received, including being selected to serve on the National African American Reparations Commission.