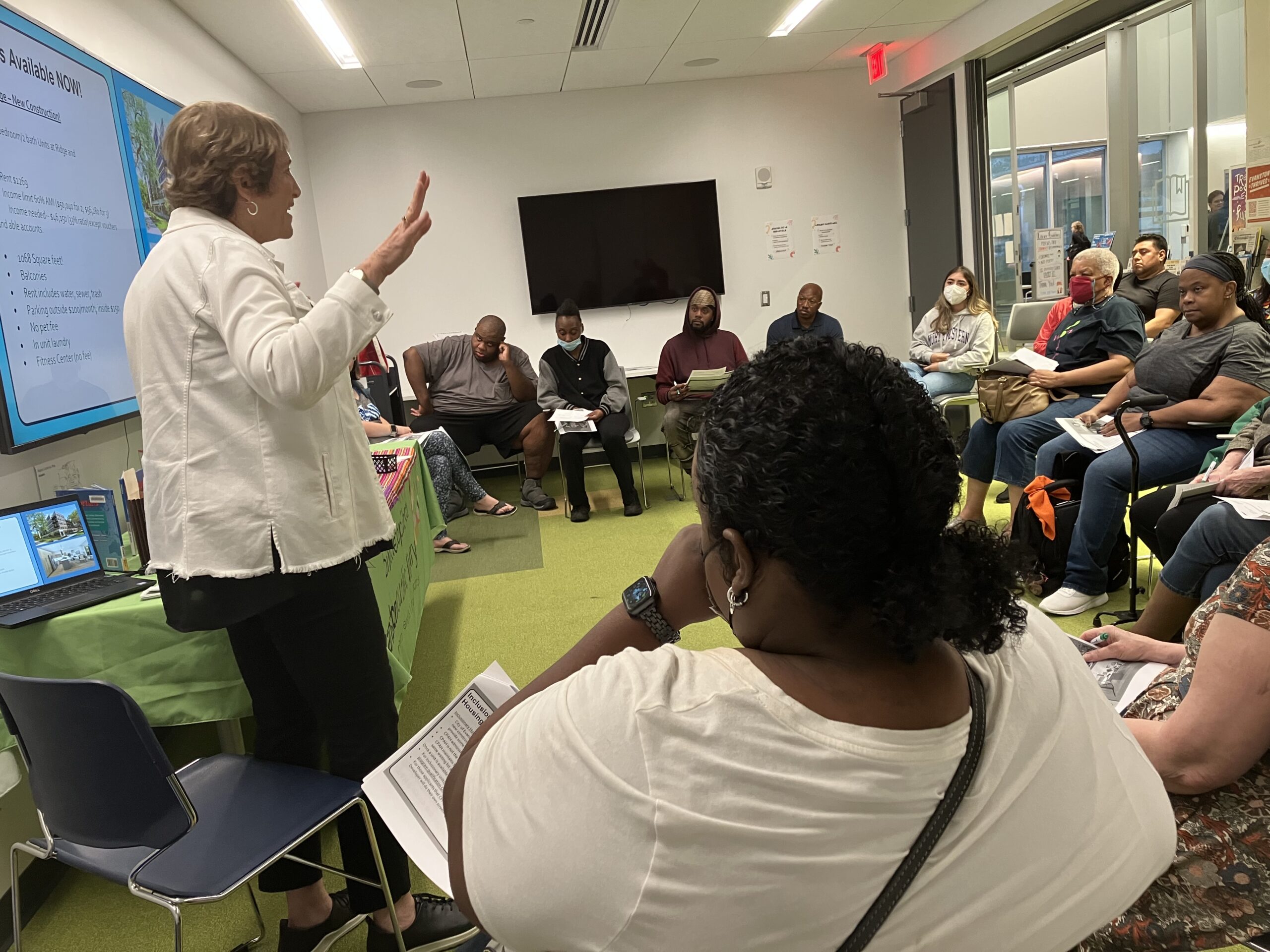 By Bob Seidenberg
Twenty years ago Joy Grizzard moved to Evanston,hoping to get a better education for her kids.
She succeeded on that front, “but I left because it was expensive — is expensive,” she said at a meeting on affordable housing last week.
She lived on Chicago’s South Side, caring for her sister until her death, “and then my kids decided that i needed to come to Evanston. And I’m just trying to find somewhere to live,” she said.
She’s finding it’s no easy thing. Grizzard, retired after working for Merrill Lynch, was one of more than 20 people, filling seats at the Robert Crown Community Center library Sept. 20, at a Community Partners for Affordable Housing (CPAH) session on how to find affordable housing.

CPAH, a non-profit affordable housing organization with headquarters in Libertyville, was formed in 2003 and expanded to Evanston in 2013, said Amy Kaufman, Director of Development and Community Relations at CPAH, leading the session.
The agency’s first emphasis was home ownership. The session at Crown focused on the agency’s affordable rentals and inclusionary housing programs.

“People come to the need for affordable housing for so many reasons, Kaufman said.
“Sometimes your career path is something that would make it difficult to compete on the open market to receive decent affordable housing,” she told her audience. “Sometimes there’s a situation in a household — a divorce, the death of a family member that was an income earner.”
“We’ve had people who had a mental health crisis in their family, and had to cut back on their hours,” she said. “Sometimes it’s seniors, sometimes it’s people with disabilities.
“I’ve been doing this now for 12 years,” she said, “and pretty much every family and every individual that we’ve interacted with has their own story.”
CPAH offers two separate paths to help people find affordable rental housing, she said. As a nonprofit affordable housing developer, the organization develops its own affordable units in Evanston. The agency buys buildings, does a rehab on them and then rents them out, said Kaufman.
CPAH then acts as the landlord on that building. To qualify, applicants must have at least $20,000 income, unless they have a housing voucher or ABLE account (a state-run savings program for people with disabilities), she said in her presentation.
Inclusionary housing
CPAH partners with the city on the inclusionary housing program.
City of Evanston ordinance requires developers of new construction residential rental projects to provide a percentage of affordable units — creating the pool of affordable units available in the inclusionary housing program, Kaufman said.

CPAH handles the application process for the units, identifying people — residents, people who work in Evanston, “whoever can qualify to lease those units,” Kaufman said.

Once it’s decided an applicant meets the qualifications on income and assets, the organization refers the person to the building’s property manager.
From there, the property manager will do the background screening and conduct a background check as they do for other residents, Kaufman said.
The building manager or landlord also set the rent, but have to stay within a certain ragged so that they are compliant with the program, she said.
To become eligible for any of the units, people have to get on the CPAH’s waiting list, a point that Kaufman emphasized at several points of the meeting.
She brought a stack of pre-application forms with her, passing them out at the meeting, so people could fill them out right there.
(To apply for the waiting list on line go to CPAHhousing.org, and then click on “Rental Housing.” Under “Inclusionary Housing,” then, there is a link to an online form.)
On an overhead screen, Kaufman flashed photos of some of the city’s newest buildings where some rental units are available.
At 1555 Ridge Avenue, a 5-story, 68-unit building, where rents for 2 bedroom units start at around $2,800 a month, three units were available, at rent of $1,269 a month for those who qualify, Kaufman said at the meeting.
“I know of one that was leased last Thursday, two are still available,” she said.
At 2211 Maple Ave., another new building, where rents for three bedrooms go for $4,300, two units are available — a studio at $1,025 and one bedroom for $1,100, Kaufman said.
To qualify, applicants would have to show an income limit of 60% of the Average Median Income — approximately $43,800 for one person, and $50,040 for two.
Trulee, a 62-unit senior independent living facility under construction at 1815 Norwood Court, is another possibility. Two units are expected to be available there, at rent of $1,305. “They have a meal plan that you’re required to purchase,” Kaufman pointed out. “It’s an $800 meal plan that they’re making available to the affordable units for $400 a month.”
Total households on waiting list: 560

Kaufman highlighted other locations expected to come aboard in 2023 — two units on Greenwood, 13 units on Main, 3 units on Church.
At the meeting, Kaufman maintained that applicants shouldn’t let the length of CPAH’s waiting list deter them from signing up.
“It’s true that that sometimes you have got to sit on the waiting list a little bit,” she said. “But if you’re not on the waiting list by the time these units come up it’s going to be more difficult.”
Kaufman declined to give specifics on the size of CPAH’s waiting list. (The city reported the total number of households on the list are 560, according to an update presented at the August Housing & Community Development Committee meeting.)
She suggested at the meeting that the length of the list isn’t necessarily the final determinant.
“Here’s what happens when a unit becomes available,” she explained. “Let’s say there’s a one bedroom. Well, you can’t put a household of three in a one bedroom. You can’t put a household of four or five in a one bedroom. So you start going down the waiting list and you start identifying households that would match up on the income side, on the size side, and for other characteristics of that particular unit.”

“I mean there’s a million reasons that you keep moving through the waiting list,” she said.

At the meeting, Grizzard said she had sent in an application before and hadn’t heard anything that she knew of. She said her move back to the area may have had something to do with it.

Now retired, she worked for Merrill Lynch where after 26, 27 years,” and then “everything went kaput. Since then I’ve been a nanny for my grandkids. Off and on I do whatever I can (work wise).
When she left Evanston, “I was a single mom,” she said. “I’m still a single person.”
“Single, senior, limited income — so it’s tough,” she said.
Iola Zachery along with her sister Amanda Williams, were also at the meeting.
Zachery said her family has roots in the city dating back to 1901. She said her landlord informed her of plans last year to rehab the building on Dewey Avenue where she has lived for 17 years and sell it at a higher price.
In May, Zachery, a block leader, said she received notice she would have to vacate the building in September.
With no certainty of being able to stay under a new lease, “I’m like, this is not working for me, it’s just not.” She heard about the CPAH session during a gathering of block leaders at the library.
She decided that, “I had to find something that I’m not going to worry about somebody kicking me out. So that’s what I’m looking for.”