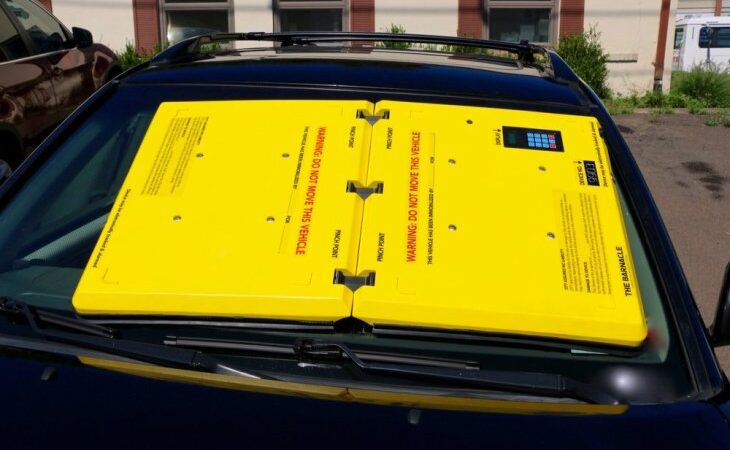 By Bob Seidenberg
Like it or not, the barnacle is about to return to Evanston after nearly a two-year absence.
City officials announced the return of booting starting this month.
A vehicle with three or more parking tickets can be immobilized, either through a metal boot placed on a wheel of a car, or a flat plastic device called a barnacle, placed across the windshield.
The practice had been suspended in March 2020 as one of a number of actions the city took to curtail enforcement to ease the impact of COVID19 on residents.
“And currently, we have amassed a very large list of debtors – over 5,000 debtors are on that [the city’s boot] list,” City Parking Manager Michael Rivera told Council members at their Jan. 10 Council meeting.
Officials made their initial announcement about return of the practice in an issue of E-News, an online compendium of news items the city sends out to subscribers.
A link was attached to the item, so individuals could see how many unpaid citations they have and whether they qualify for booting.
In the brief Council discussion, Eighth Ward Council member Devon Reid asked Rivera how a person could be removed from the list.
“And I guess I’m also specifically curious, with an equity lens in mind for folks,” he said, “are there any considerations, with COVID hardship for not being on the boot list?”
He added, “If we have 5,000 folks on this list, I’d love for us to understand where these households are.
“Is there a great number in the Fifth Ward [located in west Evanston], in the Eighth Ward? I know our two wards have the highest rates of poverty, and I would imagine that the tickets track that as well.
“And if there is a hardship,” he continued, “I’d love to know if we can apply [federal COVID recovery] ARPA funds to help folks pay city fees, especially if there’s money that’s owed to us, and we can use our funds to cover that revenue, help bail people out. I think that’s a win-win for the city.”
Interim City Manager Kelley Gandurski pointed out, “We do have payment plans available for individuals, and the city is working with people that are indebted.
“The goal is not to boot,” she said. “The goal is to try to get everybody back into compliance.”
Currently, after a vehicle has three or more final unpaid parking tickets, a letter will be mailed to alert the registered owner that the vehicle is subject to immobilization, officials said.
If the fine is not paid within 21 days from the date of the notice, the vehicle will be added to the immobilization list, they said. The owner may challenge the validity of the notice by requesting a hearing within 21 days of the date of the notice and appearing before the City’s Administrative Adjudication court to submit evidence.
Relief provisions
Rivera said the program is similar to one set up for people having trouble paying water and utility bills.
In that program, administered by the City Collector’s office, people dealing with a hardship can apply for a payment plan “and we would also be willing to work with them to lower escalation fees that might have been added to the citations,” he said.
Council member Clare Kelly, 1st Ward, asked about the form of notice – how individuals are alerted once their vehicle is eligible for booting.
“Would you just notify them by mail …or would they just find out, ‘Oh my god, I just got a boot on my car.’”
She argued “We should put out as much as we can” [about the appeals process] on the city’s website “because it is such an awful thing to get a boot on your car.”
Rivera said he would talk with the city’s community engagement team to see if the city could continue doing news blasts about the booting program through the month of March.
Those wishing to check the status of citations online may visit https://evanston.rmcpay.com/.
More information about the city’s booting program is available at https://www.cityofevanston.org/residents/parking/boot-program.