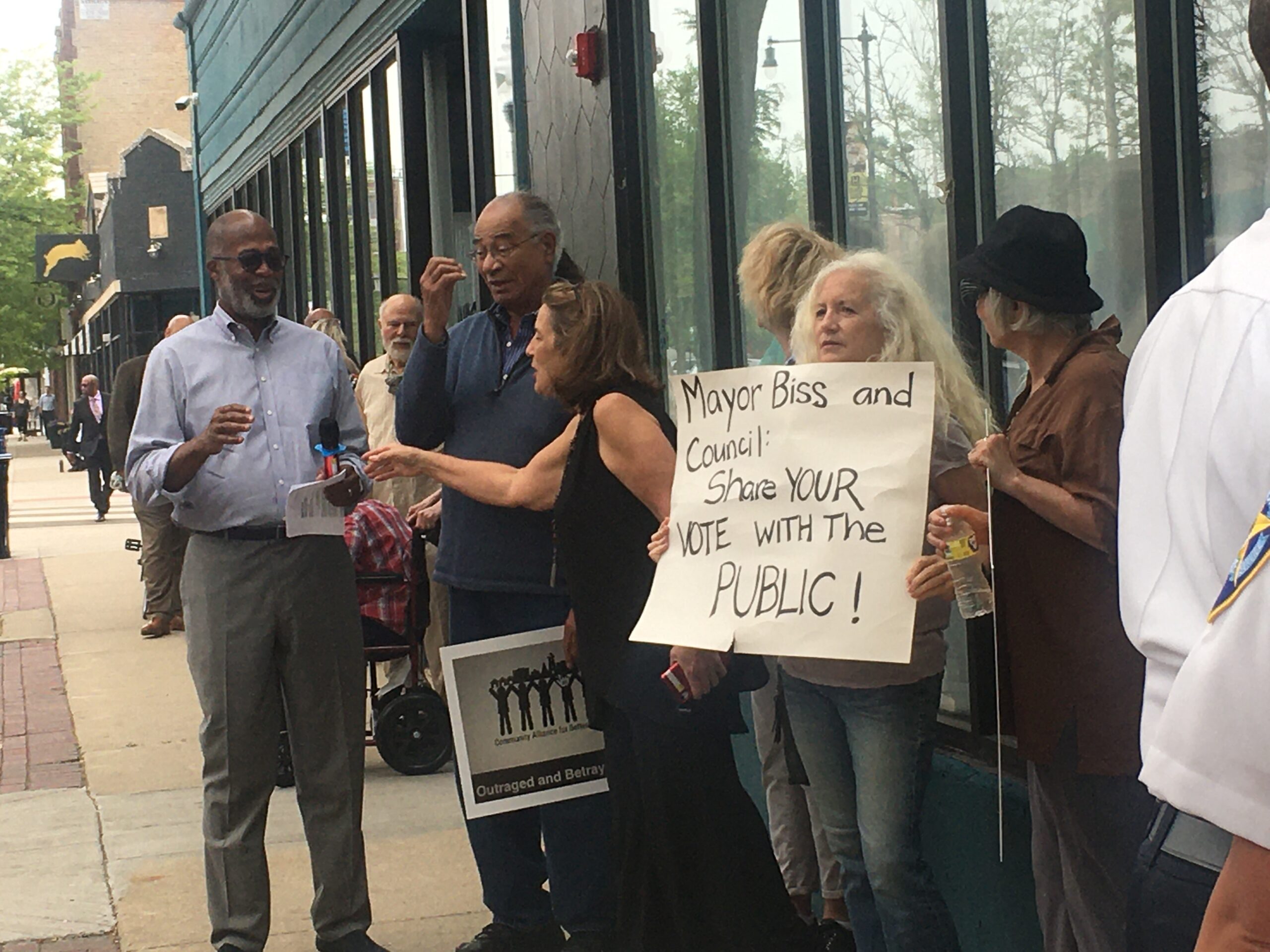 By Bob Seidenberg
Dissatisfied with the city’s City Manager choice, members of some local activist groups lined up outside 619 Howard St., today before Mayor Daniel Biss delivered his “State of the City” speech.

Protesters were on view outside the PalmHouse as guests filed in to the $75-a-ticket (for non-members) Evanston Chamber Commerce-sponsored lunch for the mayor’s speech — traditionally an assessment of the city’s significant achievements over the past year as well as the significant challenges the city faces moving ahead.

The Community Alliance for Better Government (CABG), an activist group, staged the protest in opposition to the city’s announcement May 13 of Ann Arbor administrator John Fournier as the Council’s choice to become Evanston’s city manager.

“We’ve just been disappointed in the whole process of the City Manager search,” said Rick Marsh, CABG President, standing outside the PalmHouse, once home to the Sherwin Williams paint store. “This is our third search, and it seems at each iteration it becomes less transparent, less community input, less community dialog, and so we just been disappointed. On top of that, the choice the City has made, we’re just not happy with the choice. There’s some background, there’s some non-vetting that the community has not been a part of.”

Fournier’s selection came after the 10-member Council, including the mayor, held several executive sessions, attempting to arrive at the seven votes necessary under city code to appoint a city manager.

Council members ordinarily take straw votes as part of the closed executive sessions to determine whether the level of support has been reached to move forward on an appointment.

The city has been without a full-time manager since October 2021, when Erika Storlie stepped down from the job she had held for barely a year.ard about Fournier at Ann Arbor in his latest job, it just raises concern.”

The Council announcement of Fournier as its choice came after the two candidates participated in a virtual town hall meeting May 3 that was followed up by interviews with stakeholder groups and staff.

Members of the 10-member Council, including the mayor, then held several closed executive sessions, attempting to arrive at the seven votes necessary under city code to appoint a city manager.

Council members ordinarily take straw votes as part of the closed executive sessions to determine whether the level of support has been reached to move forward on an appointment.
Before his State of the City speech, Biss left the PalmHouse and walked out to the sidewalk, speaking individually to a number of the protesters.

Bennett Johnson, onetime President of the Evanston NAACP and, in his 90s, one of the most respected members of the city’s activist community, could be heard, asking him about the Council’s choice.

“We had candidates that were very different,” the mayor told Johnson. “They both had real strengths, very serious strengths, and it’s hard because if you prefer the strengths of one guy — he was so much stronger in that, the other guy looks kind of ridiculous,” Biss said.

Marsh expressed appreciation to the mayor for coming out to meet with the protesters.
Biss said he appreciated that the groups were expressing their point of view.

“The reason we had a public engagement at all is so this could happen,” he said.
Council members still will be required to take a vote in public, perhaps as early as next Monday’s City Council meeting.

As of now, “they haven’t voted,” said Marsh. “Today we just wanted to make a statement here at the Chamber of Commerce as the mayor of Evanston is speaking. There are a number of other groups that are here. We just want to make sure we are being heard, that this community is being heard.”