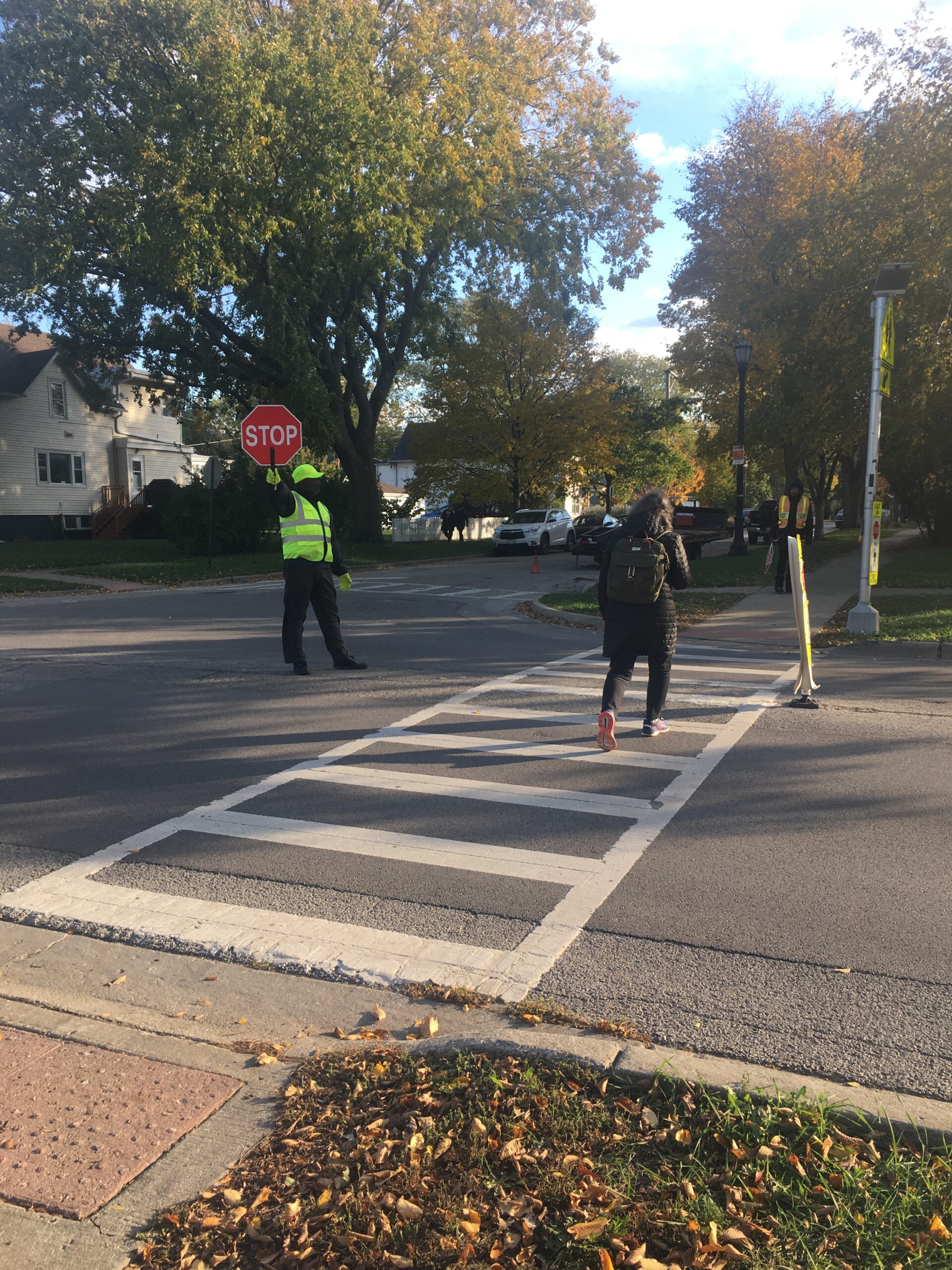 By Bob Seidenberg
rseiden914@gmail.com
For the past 20 years or so, the City of Evanston has been picking up the full cost for crossing guard services for District 65 schools as well as for some of the private schools. But based on the tenor of a city budget discussion November 1, that could change.
Looking to shed the $650,000 in cost – and perhaps some of the headaches that come with managing the service – City Council members discussed approaching the schools about a 50/50 cost-sharing arrangement for next year, and phasing out the city’s share entirely down the road.
$650,000 expense
Currently, the city pays approximately $650,000 for crossing guard services for District 65 schools, said Michael Rivera, the City’s Parking Manager, in a memo.

Evanston Township High School and Chiaravalle Montessori are the only schools that reimburse the city for the service, he said.

ETHS pays nearly $72,000 to cover the costs of three crossing guards and one parking enforcement officer; Chiaravalle Montessori pays $10,500 for the one guard it uses, Rivera said.
Until two years ago the city was mandated to provide crossing guards, Rivera told council members. Through the state’s intergovernmental board, that is no longer the case, he said.
“So … schools can provide their own crossing guards; they can enter into agreements with us to have a revenue-share-based split; or they can also engage in volunteer crossings for their local school districts, school councils and parent clubs,” he said.
Leading off council discussion, Fourth Ward Council member Jonathan Nieuwsma looked at the issue from a climate perspective.

“I think having kids walk to school, and walk to schools safely, is good – not only for their health, but for the environment. However we paid for them, crossing guards are important,” he said.
“I do firmly believe that private schools should pay for their own crossing guards,” he said. “I don’t think that should be an expense borne by taxpayers. For public schools, one way or the other it’s coming out of my pocket, and some residents’ pockets as taxpayers, so whether that money goes through the city or through the school district I guess I’m kind of ambivalent.”
COVID-19 adding to problems
Rivera added another factor for the council members to consider.
Starting in 2018, the city began contracting with Andy Frain Services to provide crossing guard services in place of the city hiring crossing guards directly as employees, Rivera said. Ever since the pandemic hit, however, the company has been seeing fewer people “actually wanting to be around children and wanting to provide those services,” he said.
“So it’s been very tough for the vendor to provide the crossing guards,” he told council members at the meeting, which was held online as well as an in person. “And then the second problem for the city is that when the vendor doesn’t provide a crossing guard, we subsidize that crossing with a parking enforcement officer.”

That takes the officer away from normal duties, which include writing an average of four to six tickets an hour, Rivera told the council.
The replacement guard is also working at a higher hourly rate.
“When somebody is absent from a corner, it costs the city approximately anywhere from $130 to $180 per hour to man a corner that should be manned by a school district or private school,“ Rivera said.
The city’s current contract for crossing guard services for the schools is due to expire December 31. An extension would carry the services through the end of the school year next June, Rivera said.
“So that is why we’re here today seeking direction as to how we move forward,” he told council members.

With a mandate no longer in effect, other municipalities have either stopped providing services or entered into revenue-sharing agreements, he said, naming Glencoe, Buffalo Grove, Wheeling, Urbana and Eureka as examples.
Evanston City Council members appeared interested in following a similar path.
“I have three children who use crossing guards every day,” said Council member Thomas Suffredin, 6th Ward. “But it seems like this is a tradition that has been carried on and doesn’t make any financial or administrative sense.”
He asked what would be an appropriate phasing out of the agreement from the city’s side.
“I mean, we can provide money for this till the end of the school year, and if we say we’re not going to fund this in the fall and they say they’re not going to fund it in the fall …” Suffredin said, posing the scenario.

Riviera said that was the situation in Eureka, where eventually the two bodies entered into an intergovernmental agreement.
An ideal resolution for the city, Rivera told council members, would be for “the entire thing migrated to the school districts with a three-year plan – a third, a third, and a third,” he said of the city’s share of costs, before phasing out entirely.
Suffredin said it would be appropriate for the city to enter into discussions with the districts.
The schools are part of a community “with a lot of active parents or volunteers,” he noted, and might be better able to cover crossings now left vacant because of understaffing “that we’re now picking up with paid city employees.”
Prior to 2018 and the move to Andy Frain, Rivera noted, “this was an in-house service. The City of Evanston had more staffers. … They were dedicated to hiring and managing the crossing guards, and the crossing guards were all vetted through the City of Evanston.”

Council member Cicely Fleming, 9th Ward, observed that with the program covered in the city’s budget until June, officials may want to go back to the school district and ask them to pick up at least half the cost.
“It seems like a fair ask,” she said. “They’re our streets; we’ve done it [footing the cost of the program] for years. We’re going to keep doing it at half the cost for maybe a year, maybe two years,” at which point the schools could pick up the full cost, she said.
She noted the difference in support the city and schools receive through property tax revenue, with the city receiving much less. In addition, “we’re providing safe streets, we’re plowing the streets and everything else,” she said.
District 65 takes up about 41% of the property tax bill and the city about 20%. The city has the authority, however, to levy fines and fees, something school districts do not have. The school district levies, moreover, are somewhat limited by tax caps, while the city can raise taxes any amount decided by the City Council.
Council members did not take a vote on the issue, though consensus appeared strong for the city’s phasing out of the crossing guard program for the district and private schools.