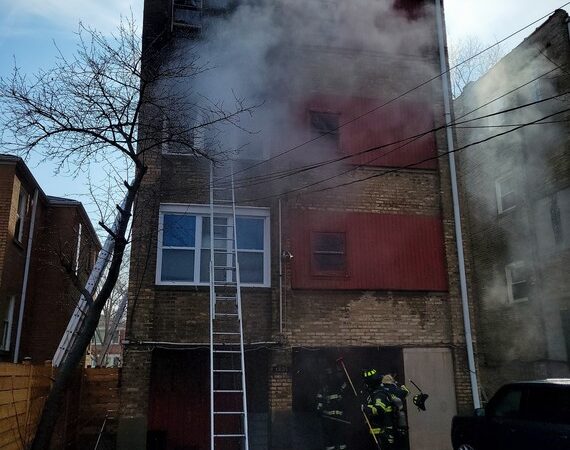 First-responding companies encountered heavy fire in the rear of the structure and immediately called for additional resources to contain the threat, officials said. Neighboring fire departments were called to assist with fire investigation and respond to emergency calls in Evanston. The fire was under control within the first 30 minutes of the incident, officials reported.

Residents were able to exit the building safely upon arrival of fire crews, and no civilian injuries have been reported. Firefighters successfully rescued two cats and two dogs from the burning building, reuniting them with their owners on location, officials said.
The American Red Cross was notified to offer the 12 displaced residents and their animals mass care and shelter services. One firefighter was injured and treated on scene but denied transport to the Emergency Room, officials said.

A portion of Monroe Street was briefly closed during the afternoon to allow for the staging of fire vehicles and was to be reopened once crews were finished with their investigation.